Posted on June 18, 2014 by ukdesperatehousewifeusa

Going out for ice-cream

I don’t think in the UK I’ve ever been ‘out for ice-cream’. But I was watching an American programme recently where the family treated themselves to a trip out for ice-cream and I regarded this as a very American thing to do that I had not done yet.

So, today I asked Harry if he wanted to go out for ice-cream.

‘Haven’t we got any in the freezer?’ he replied.
‘No, darling,’ said I. ‘This is America and if you want a special treat you go out for ice-cream.’

And so off we popped to Baskin Robbins, which is located in Dunkin Donuts, and there we sat with every other Tom, Dick and Harry who had decided to go out for ice-cream.

It really is a thing this ‘going out for ice-cream’.

We saw a whole big family with grandparents, parents and grandkids (unfortunately we stood behind them in the queue and it took forevvvvvvver); two hunky firefighters, both of whom had sprinkleson their cones, bless ’em; one tired looking dad, with a baby and a toddler, who spent most of his time wiping up mess; and two mothers and their sons who spent most of the time taking it in turns to read some odd fantasy book VERY, VERY loudly to each other.

In the UK I don’t know anyone who’s ‘gone out for ice-cream’. I don’t think this is a British past time, unless you’re at the seaside, but then you just get one as you’re passing by on the seafront and then it melts into the sand or the seagulls try to eat it.

But, it certainly seems that it is an American custom, which I will now add to – and then tick off – my Bucket List, since I have now partaken in the phenomenon that is Going Out for Ice-Cream 😉 . 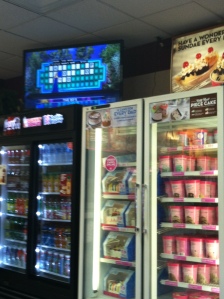 The other day I said to an American friend ‘I’ll join the queue.’ (I can’t remember what on earth it was for, but I think it was v v v interesting!)

‘Say that again!’ said my friend.

I said it again.

‘I love that you use the word queue,’ said he.

He went on tell me that most Americans use the word “line”.

Ain’t that a funny thing. 🙂

We Brits are very, very good at queueing, which is why, I guess, we have a verb for it 😉