Posted on June 14, 2014 by ukdesperatehousewifeusa

After my blog about not having been to various stores in the USA after two years here, some folk were in shock and had to be taken to hospital with heart palpitations.

Actually, that’s a bit of an exaggeration, but there was some genuine shock by some peeps about this fact.

‘That’s like one of my favorite places to shop!! How have you not been there yet?!?’

‘Forget Miami and New York, this totally would’ve been my first stop if I went to America!’

And then this: ‘Let me take you and relieve you of your Costco virginity.’

So, yesterday I was deflowered in Costco by my friend Andrew.

Quite simply, it was a $258 deflowering, and rather marvellous it was too! It wasn’t hideous in the least! And Andrew made sure I saw Costco’s finest treasures, as well as large jars of mayonnaise that could fuel an entire fleet of drones. 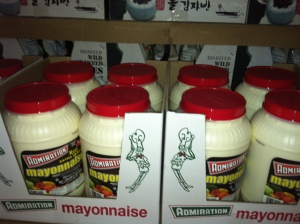 Bloody loads of it!

As well as mayonnaise, these are the other joys of Costco that I encountered. 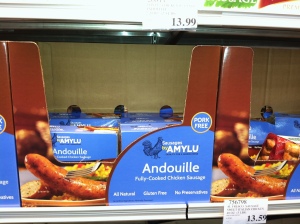 This. Naughty, but nice.

My friend, Andrew, took much joy in telling everyone that it was my inaugural visit to Costco and that I was doing very well. People were in shock and disbelief that I had not been here before. ‘She’s British,’ Andrew explained and they nodded understandingly.

And with that, my American Costco journey was complete. Yes, I ate all the tasters on the way round; yes, I had a $1.50 hot dog at the food court; and yes, I bought things I really didn’t need. Excellent fun!

Where I am in Maryland the Orioles are BIG. They are THE baseball team of Baltimore and thousands flood to see them play every night of the week during the season. I’ve seen baseball games, but not the Orioles. Shame on me!

But last night we did it in style in a VIP suite.

Yes, Brits, baseball is not cricket, nor is it rounders, and yes, there are lights and screens and flashing things and fireworks and hot dogs and beer and nuts – and that’s what makes it so uniquely American.

My breath was rather taken away when I entered the stadium. It’s amazeballs.

Because it is outdoors, it reminded my why I like baseball and not basketball. Whilst there was all that ‘stuff’ going on, you could actually watch the game too, and, even though the Orioles lost, it was a great game.

I tried v v hard to get on the Dance Cam and the Smile Cam, but sadly to no avail 😦 Gutted!

All the lights and wotnot 🙂

Good game, lots of fun, as Brucie would say 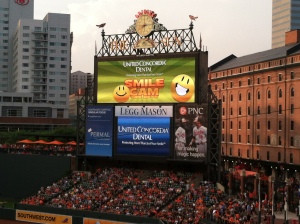 Baseball at night is coolio (actually, they were cleaning the ground whilst the fireworks were on! 😉 )

Yes, yes, now I haven’t yet been to an American football match, but that is on the cards for September at a Ravens match, so whoop/hoorah to that too (I will be doing that whilst it is still WARM and not watching in the freezing Baltimore cold though!)