Posted on November 1, 2013 by ukdesperatehousewifeusa

Well, another year down, another shed load of candy gorged upon and some very amazing costumes worn. Good work America! 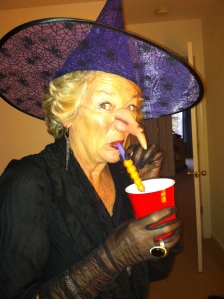 Haha, lobster in a pot! 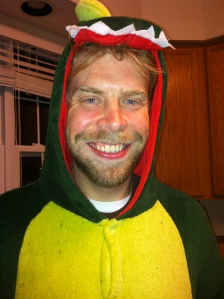 Even the dogs got a look in on the costume front.

And the poor children who have no say in the matter also get all dressed up….. 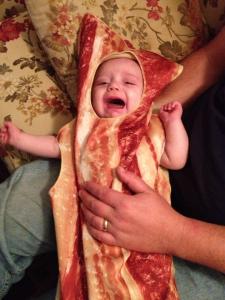 And such effort, even in the Halloween food…

One thing I learned is that there is something the night before Halloween called Mischief Night. What is this, I enquired. And why did I miss it? Apparently it happens in the UK as well as the USA and other countries (tho, to be honest most Friday nights in any city in the UK could be deemed ‘Mischief Night’….) 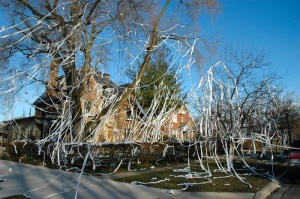 Anyway, Mischief Night (also known as Devil’s Night in Detroit, Cabbage Night, Gate Night, Mizzy Night, and Miggy Night (in parts of England – apparently, tho I’ve never heard of it!) is an annual tradition in parts of the United Kingdom (really?!!), Canada, and the United States when people (primarily teenagers and preteens) take a degree of license to play pranks and do mischief in their neighbourhoods. The most common date for Mischief Night in England is November 4th, the day before Bonfire Night, and in North America is October 30, the day before Halloween.

Well I never did!

What sort of mischief, then? Well, all within the law, of course (especially in Howard County, I was reliably informed). One might be mischievous by throwing eggs at houses and cars, put shaving cream everywhere and then put toilet paper over the whole yard (as above).

Obviously the authorities don’t like this very much and some towns have a zero-tolerance policy on mischief night since some “homes and moving vehicles have been the target of eggs, rocks and in some instances paintball guns.”

Mischief Night has been depicted on-screen too. Now I feel like I have not been paying attention….

A 2006 film, Mischief Night, is based on events surrounding this night in Leeds, UK.
In Lark Rise to Candleford volume 3 there is an episode featuring Mischief Night.
In the 1994 film The Crow, based upon comic book of the same name, the protagonist, Eric Draven, and his fiancée are murdered on the eve of their Halloween wedding on “Devil’s Night” by a street gang on the orders of Detroit’s most notorious crime lord, Top Dollar. With the help of a mystical crow, Eric returns from the grave on “Devil’s Night” exactly one year later to exact revenge against the crime lord and his henchmen.

So, there we have it. Mischief Night is for real! Next year, maybe…. 😉