Posted on October 31, 2013 by ukdesperatehousewifeusa

It’s crazy day – which means it is officially Halloween!

Kids get up at 6am because they are so excited about it being Halloween. Fact.

People wear costumes whilst shopping in the supermarket. Like this.

On this day normally sane people shove candy down their oesophagus until they throw up. And then they get a sugar hangover.

As I type this I can hear the song ‘I Want Candy’ blasting out from the school Halloween parade.

(What an excellently retro video!)

I know the “V-Sign” gesture i.e. extending your index and middle finger in a manner similar to the “Peace” or “Victory” gesture with the palm facing inward is what we do in the UK, but in the USA they reverse the palm, which is considered offensive to the British. It basically means ‘F*ck off’ to us Brits!!! Just so you know, American chums! 😉

The British V sign of peace and happiness and wotnot 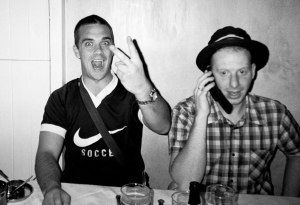 The reverse British V sign meaning ‘F*ck off’, or similar 😉

Americans seem to use the second one a lot without knowing that some Brits might just think they’re being rude….. But now we know you just got it the wrong way round, so no offence taken 😉