Posted on November 2, 2013 by ukdesperatehousewifeusa

Do you have limericks? I don’t know if you do, but we Brits enjoy them very much, especially saucy ones.

This might be an American one! Not saucy tho….

A limerick is a short, humorous, often nonsense ‘poem’ and comes in a five-line anapestic meter with a strict rhyme scheme (AABBA) – yes, I am an English Literature graduate 😉

Anyway, the limerick is sometimes obscene with humorous intent. Therefore, we Brits generally find this tres amusing. The limerick form dates back to England (apparently, says Wikipedia) as of the early years of the 18th century and was popularized by Edward Lear in the 19th century, although he did not use the term, and was generally more tasteful than the one I will be sharing with you.

The limerick packs laughs anatomical
Into space that is quite economical.
But the good ones I’ve seen
So seldom are clean
And the clean ones so seldom are comical.

So, my Brit friend Judy retold a little gem to me yesterday, since we were discussing if Americans used the term ‘sod’ as in ‘sod off’ (‘please go away’). For the record, we don’t think they do. But this got Judy to telling the limerick of Roger the Sod, which reads thus:

There was a young girl from Cape Cod
Who prayed for a baby to God
But it wasn’t the almighty who lifted her nightie
It was Roger the lodger, the sod!

Judy was also kind enough to lend me a book about Eastenders which was written in 1988 for BBC America, and thus aimed at Americans. Oh boy, it is genius! 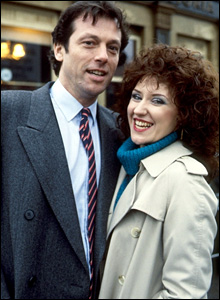 So, How to Speak Eastenders….

This is a brief glossary of Cockney expressions. It starts thus:

Hoy, Yanks!
Wotcha from Albert Square.
We know our plonky cockney accent could put you in a proper old flap – or even make you go spare. But we don’t want you to be stroppy. So we’ve used our loaf and sussed out a solution to this whinge: An Eastender’s glossary!
Now, maybe you don’t give a monkey’s, but frankly, we think it is rather brill.
In any case, we’d prefer to give you the old flannel than give you the stick. And besides, it’s about time the penny dropped.
Don’t lose your rag or get the hump if you don’t catch on right away. Just give us a bell, or better yet, drop by our gaff, and unless we’re half cut (or on the fiddle!) we’ll be chuffed to death to help.
Ta ra, The Eastenders. 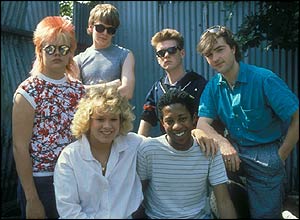 The young Eastenders in the 1980s

Then there is a translation:

Hey, Americans!
Greetings from Albert Square.
We know our unfamiliar cockney accent could send you into a panic – or event drive you crazy. But we don’t want to be difficult. So we’ve used our heads and figured out a solution to this problem: An Eastender’s glossary!
Now, maybe you could care less, but, frankly, we things it’s rather ingenious.
In any case, we prefer to butter you up than give you a lot of trouble. And besides, it’s about time your were enlightened.
Don’t lose your temper or get angry if you don’t catch on right away. Just give us a call, or better yet, drop by our place, and unless we’re half drunk (or involved in a shady deal!), we’ll be very pleased to help.
Bye now, The Eastenders.