When we first said we were heading to California, most everybody who had been there said that we really must go to San Diego, so we did, and I’m not always one to do something just because everyone says do it, but it must be pretty good if y’all are talking it up were my thoughts. 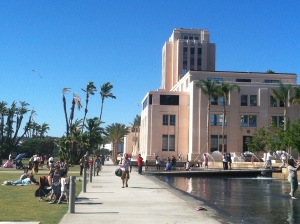 The thing about San Diego is that it is very charming, and I can’t say our fleeting visit did it justice (we’ll definitely be back to see more of the city) because we were quite distracted by the fact that Comic Con was taking place in the city just two days after our visit. I think Harry would have camped out to see some comic dudes, and I did hear the Game of Thrones cast were in town, but they definitely weren’t having pre-Comic Con fish tacos at our downtown restaurant.

At this point I think I need to talk about my slight obsession whilst I was in California with fish tacos.

Now, I’m not a great lover of Mexican food, and whilst being that near to Mexico it seemed almost criminal not to partake in the culinary influences that had seeped over the border (we nearly took our passports on the San Diego visit so we could pop over the border, but someone told me that the next time they’d see me was on the front of the Daily Mail with my head on a spike if we did that, but I think they might have been jesting, in retrospect).

Anyway, fish tacos. They seemed to me a lighter and slightly healthier variation on the taco. So, once tasted they were much-loved, and I can confirm that during my two weeks in California, I ate approximately 15 fish tacos. That is a lot of fish tacos, and I even had one for breakfast one day. Feel free to gag.

The Baja fish taco is the best, with mango salsa

Next up: plastic surgery conversations in LA and the camper van….