Posted on May 26, 2014 by ukdesperatehousewifeusa

Today is a holibobs in the USA (Memorial Weekend), and the UK has its May bank holibobs too today so there was no need to feel jelly about anything, especially when we get to spend time here in Southern Maryland….. 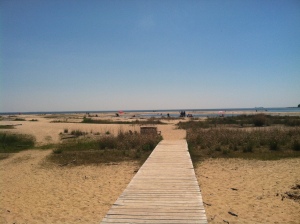 We wondered, as we were driving down to our destination, what the traffic on the M5 and M4 would be like back in the UK for the bank holiday weekend as everyone bundled up their cars and headed off to Devon and Cornwall. Hellish, we suspected. And we thought the same as we breezed through on the roads on the way back. Driving in the USA is much easier, because of the big ole roads and the massive amounts of space, plus not everyone was going where we were going! 🙂

We have season passes this year to a water park near DC. We’ve paid up and we can go whenever we jolly well please, which is faberooni.

But, I’ve heard some comments from folks in the community who state they wouldn’t go there, and some newbies in the area have been advised that they shouldn’t bother going. Is it that the rides suck? Is it that its way too expensive? Is it that the the drive is long? Is it that the queues are a nightmare?

None of the above. The reason? Because it’s ‘quite black.’

Yes, read that again. Some people have been advising others not to go to a water park in Maryland because ‘many of the people who go there are black’.

I was totally gobsmacked by that ‘advice’, and confused, and very, very offended.

I still love me a bit of American politics, and spent the last few weeks organising an event for my buddy Tom Coale who is running for a seat in the Maryland House of Delegates in 2014, representing the newly formed District 9B in Ellicott City.

This is that totally glamorous event wot I organised, hosted by my lovely #hocohomo chums 🙂

Me and host Dale 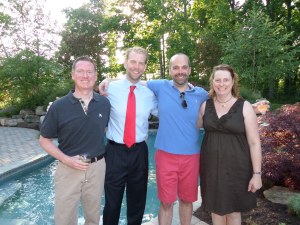 Tom with hosts Dale and Jeff and Carrie from Equality Maryland

Doesn’t it look classy and fancy and wotnot? I commented that in the UK such events might just be held in a poky old church hall with the wind whistling through and a urn of tea on the go….

Well, that was the marvellous event – and this was the after-party 😉

I wrote a piece about Tom too, which you can read here over a nice cup of tea.

And yes, to the woman who asked me this weekend if we Brits still drink hot tea in 90 degrees, the answer is ‘of course we do!’ 🙂