Posted on November 3, 2013 by ukdesperatehousewifeusa

Remember, remember the 5th of November

What am I harping on about, American folk? Well, the Brit thing called Guy Fawkes Night/Bonfire Night/5 November. What’s that all about then?

It’s about burning the effigy of a man on top of a mass bonfire and getting fireworks out and standing in the utterly freezing British cold with your toes nearly falling off into your Wellington Boots, that’s what it’s about. I’m not a massive fan, as you can tell…. 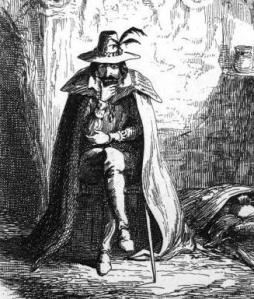 The 5th of November’s history begins with the events of 5th November 1605, when Guy Fawkes, a member of the Gunpowder Plot, was arrested while guarding explosives the plotters had placed beneath the House of Lords. Celebrating the fact that King James I had survived the attempt on his life, people lit bonfires around London, and months later the introduction of the Observance of 5th November Act enforced an annual public day of thanksgiving for the plot’s failure.

And in the 21st Century in England we still place an effigy of a man on top of a big pile of sticks and burn it, and call it fun…… 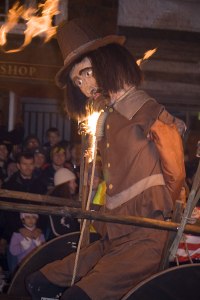 How is that not just a little bit weird…..

If you’re a Brit in the USA, the BBC has given us expats some reminders about reliving Bonfire Night in America….

Aussie map of the USA

This is a map of the U.S. states labelled by an Australian who’s never been here…. it just needs sharing 🙂 (Click on it to enlarge.) 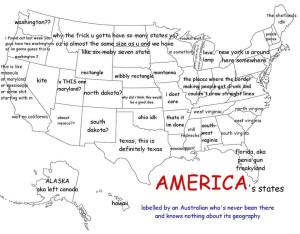 This is bloody brilliant!