Posted on January 2, 2015 by ukdesperatehousewifeusa

My love affair with Savannah

I don’t think a city in the USA has had more of a profound impact on me than Savannah. 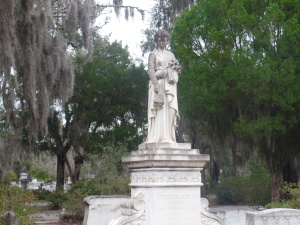 Let me offer you a few quotes about Savannah from John Berendt’s excellent, dark and evocative novel Midnight in the Garden of Good and Evil to get you in the mood for this part of the roadtrip:

“Rule number one: Always stick around for one more drink. That’s when things happen. That’s when you find out everything you want to know.”

“….the images in my mental gazetteer of Savannah: rum-drinking pirates, strong-willed women, courtly manners, eccentric behavior, gentle words, and lovely music. That and the beauty of the name itself: Savannah.”

“…the whole of Savannah is an oasis. We are isolated. Gloriously isolated! We’re a little enclave on the coast – off by ourselves, surrounded by nothing but marshes and piney woods.”

And from Clint Eastwood’s [not so evocative] movie version…

“This place is fantastic; it’s like “Gone With The Wind” on mescaline. They walk imaginary pets here, on a f*cking leash. And they’re all heavily armed and drunk. New York is boring!”

With these quotes in my mind, I was ready to be entranced and enthralled by Savannah, and it did not fail to live up to my expectations.

If there is a Southern city I can see myself living in, it would be Savannah. I felt it consume me with its stunning Georgian architecture, its ghostly arbor canopy, its rich history, and its luxuriant heat and mesmerizing swampy isolation. 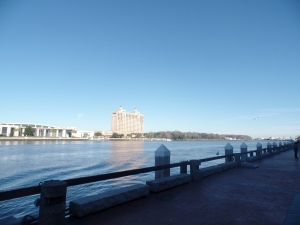 The river on Christmas day

It also reminded me somewhat of my hometown on Bath, with its squares. There are exactly twenty-one squares, which Berendt notes in his book: ‘As far as Miss Harty was concerned, the squares were the jewels of Savannah. No other city in the world had anything like them. There were five on Bull Street, five on Barnard, four on Abercorn, and so on. James Oglethorpe, the founder of Georgia, had been responsible for them, she said. He had decided Savannah was going to be laid out with squares, based on the design of a Roman military encampment….

‘”The thing I like best about the squares,” Miss Harty said, “is that cars can’t cut through the middle; they must go around them. So traffic is obliged to flow at a very leisurely pace. The squares are our little oases of tranquillity.”‘

I agree, Miss Harty. The squares were very reminiscent of Bath. At least while I was walking through the Savannah squares, I realised, I wouldn’t be likely to bump into any ex-boyfriends, as always happens in Bath 😉

And, boy, do I love those Savannah houses. I could totally live in one of them. Would I be a Southern Belle, though? I rather think not….

Christmas morning was spent in Bonaventure Cemetery, where much of the movie and book were placed. It’s a creepy, eerie and beautiful place.

The Dickensian bridges over the cobbles

The other part of Savannah that was haunting was the Downtown area, where walkways and bridges rose above the cobblestones in a Dickensian fashion – ‘It’s like the scene in Oliver Twist!’ I declared a lot upon seeing these above me before the river winds its way up. To our delight, dolphins plunged in and out of the water on Christmas Day as we sat having a drink. Heavenly. 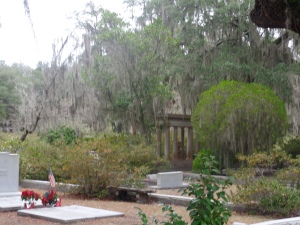 It was wet and warm down South at Christmas (as the actress said to bishop/that’s what she said 😉 ), but this did not detract from the charm which Savannah exudes.

Savannah, I will be back. Miss you already… 🙂

Next up: Plantations, a six hour drive to the Great Smoky Mountains (don’t worry, you get a snippet of it!), and Cherokee land.