Posted on January 27, 2014 by ukdesperatehousewifeusa

The Mall in Columbia re-opened today at 1pm, after the shooting at the weekend.

It felt subdued, but people proudly made their way around Mall, confirming that they were indeed #hocounited. People were sombre as they reflected on the weekend’s incident. There was an affirmative police presence, but not too overwhelming. Folks queued up to get lunch and went about their business, but above us, on the second floor, was the reminder of what had happened on Saturday morning.

The location of the shooting was considerately sealed off, and at the pond outside Lord and Taylor’s members of the public were encouraged to leave a flower and a message for the two victims and their families. Outside Starbucks a banner held steadfast in the cold wind – ‘Forever in our hearts’.

It took a deep breath to get myself into the Mall today, but you have to get on with life, and that’s what the Howard County community is doing. I felt proud of this strong community today – very proud indeed.

This captures the sentiment of the community

Beautiful words for the victims

Flowers for the victims 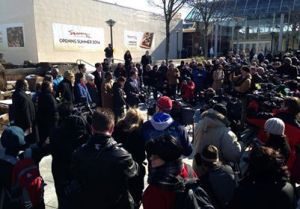 For video of the memorial and pictures of today’s events, see the Baltimore Sun’s write up.