Posted on October 3, 2013 by ukdesperatehousewifeusa

Parenting in the USA

I have come to believe, since living out here, that the UK and USA parenting style are v v v v v different. (For some people, that is – we have met some parents who parent more like us, and, before you kick off, neither style is right and neither is wrong, they are just different.) It’s based a lot on culture I think, but I only have A level psychology, so what do I know about it!

The reason I say USA and UK styles are different is because I grew up in the UK and had British-style parenting – obviously. So I kind of think back to my experiences, and how we brought up Harry for the first 5 years, and how my friends all do it back home. I bet if you asked any Brit out here, they would say they’ve changed their style, and adopted different habits and routines.

We are now parenting Harry with our experience of British culture, with some of the American style and culture thrown in, which I think is a wee bit confusing for him sometimes.

The other day I asked him to sing a song to me that he had learnt in class so that I could learn it too, and then we could sing it together – because all I know and teach him are British poems, songs and nursery rhymes. Plus, I don’t sing very well at all, so it can be quite a overwhelmingly hideous experience for him.

So, he stood there, placed his hand on his heart and forthwith pledged his allegiance to the flag of America. I applauded (even though he mumbled through some of it) and inwardly giggled. Bless him! He then told me that he shouldn’t really have done that because it wasn’t Friday and there weren’t any other people doing it with him…. 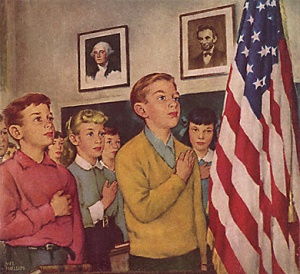 Anyway, I asked Tricia, a Brit in the USA, to comment on parenting in the USA to find out a bit more about her thoughts on the difference…

Before I became a mother I thought raising kids was basically the same all over the world. They all need help wiping their bottoms and doing their homework.

But after moving to America from London over 8 years ago and having two kids here, I quickly realized the way I was brought up in the UK, is different to the American experience.

While I love the positive reinforcement and emphasis on making life an adventure there are some parenting trends that are a little alien to me and I find myself in a continuous dilemma whether to go with the flow or stick to what I know!

1. Sports Junkies – Every kid I know plays some kind of sports or does at least one after school activity. I’ve heard many stories about parents switching their kids from activity to activity because they quit after two sessions. Even worse, kids as young as 5 getting burnt out because their schedules are so full. Between the neighbors asking me to come watch their little athletes play or the flyers that kept getting sent home I’m constantly resisting the pressure to become a soccer mom.

2. Football Gear – Along with the sports comes the gear. Living in a football-obsessed town means even the kindergarteners are expected to wear the team shirt or colors to school before a big game. The shirts aren’t cheap and I resent feeling like my kids are missing out if they don’t have one.

3. Birthday Party madness – Whatever happened to a nice cake, balloons and dancing around the living room? Now its moon bounces, magicians, face painters and the local zoo in your backyard. It’s easy to get caught up keeping up with the Joneses but once you start the craziness, it’s very hard to stop your kids expecting a birthday extravaganza each year.

4. Sleepovers – My kids were getting asked to sleepover before they even started school! I only ever spent the night with my cousins. Do I let them spent the whole night away in a strange house or enforce a no-sleepover rule because I never did it?

5. Bus Stop politics – Hurray for the yellow bus that saves me gas money every week but boo to the politics that comes along with it. First you’re forced to speak to the other parents you’ve never seen before in your life but apparently are your neighbors. The last thing I want to do at 8am (usually before I’ve even had a chance to shower) is chit-chat about the lady next door’s hernia operation. And heaven forbid the bus driver does something mean – you’re now part of a bus stop posse and expected to throw disapproving looks and call the school or sign a petition of protest. 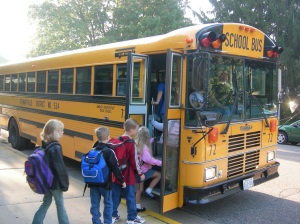 Tricia Clarke is a freelance journalist and blogger who has worked for the BBC and NPR. Her website www.britsacrossthepond.com celebrates the British experience in America and features interviews with actors, comedians and every day expats. Follow her on Twitter @britsacrosspond

Yes, I’ve heard all about these birthday parties, and whilst I’ve never been a fan of children’s birthday parties ever, I am going to get myself on the birthday party circuit so I can witness the USA craziness. I heard that around here, for one girl’s 10th birthday, they shipped in exotic animals in cages. I mean, really??!!!!

BBC interview about the Government Shutdown

I had a little chat today with the lovely peeps at BBC Radio Gloucestershire today about the impact of the government shutdown, as I see it.

It’s a short clip, and it will be going out in their breakfast show tomorrow morning. You can listen live if you fancy it!