Posted on March 21, 2013 by ukdesperatehousewifeusa

What I love about America is their capacity to party about ANYTHING. Of course, there is the age-old joke about everyone in the States having a claim to Irish heritage. After all, we’ve all seen Far and Away and that was obviously as entirely accurate as Tom and Nicole’s accents were.

Anyway, who cares about heritage when there is Guinness to be drunk and potato cakes to be eaten. We have a proper Irish friend over here – like really Irish, from Ireland, wears green and crossed the sea and everything, so we partied with them. And got in to the spirit – marvellousness!

I think we look extremely authentic, especially the other half, who very much resembles the gypsy variation here, bless his Irish roots.

Comments from Americans about the States

I wrote a piece recently on a site dedicated to all things British about what I appreciate about America and Britain (http://www.smittenbybritain.com/an-appreciation-of-america-and-britain/) and it got quite a few comments, which interested me. Many were from Americans, or Brits who live in America, and they enjoyed the article and felt homesick reading it and agreed totally with my observations.

But, oooer, some Americans got a little bit ruffled. For instance, this comment: “….one of the best things about the US (it really isn’t correct to just call us America) is that we are a HUGE country and each region is vastly different. Where you are in the stuffy east coast is one of the ultimate dichotomies of old traditions and new liberalists.”

Oh dear, I think she got the wrong end of the stick with my light-hearted observations about America (the USA) and Brits.

And this one: “I reckon you are stereotyping Americans and their towns. I’m Canadian and go to university in the U.S. and live in a beautiful town call Ridgewood in New Jersey. in Ridgewood they have a lovely high street/ main street. and Americans do walk. I know that the British love slating the Yanks. you should get out of your house and meet the Yanks, they are very nice people.”

I replied thus: “I have made a concerted effort to meet Americans in all my daily practices – blog parties, teaching Zumba and everything else I do. I am probably one of the most proactive Brits out here in terms of getting in with the ‘natives’ – and we have a lot of fun talking about our differences. I love they way they respond to their own idiosyncrasies and they joke with me about our British ones too, of which I am well aware!

“I know there are places in America that are different from where I live right now, and my plan is to experience of much as the place as I can whilst we are here – we have a long, long ‘to do’ list!”

So, I was making arrangements to meet with an American buddy for lunch the other day and when we had decided on a date to meet up, I texted to her: ‘Cool, in the diary’. Well, she did not know what I was on about and asked what I meant by ‘diary’ and I replied ‘calendar’ and then she got it. 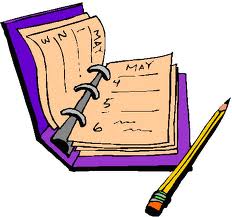 This had me intrigued….why not use diary? I think she thought I meant journal, like a recording of a past event, which must have confused her muchly. Is it a British thing to say ‘I’ll put that in the diary’ for future events? Or is it just me confusing diary and calendar? But I thought Americans used the phrase ‘I’ll diary that’ for things that are going to happen. Oh, it’s all so confuddling (not a real word).

When I made a call to my US docs t’other day, the lady on the other end reacted to my British accent immediately and instead of using the American pronunciation of ‘ma’am’ as in ‘ham’, which is used a lot here, she started calling me ‘ma’am’ as in ‘farm’, like you would the Queen. 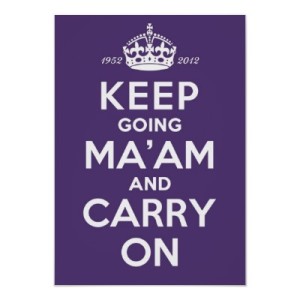 After she said it about five times, I got the giggles, apologised and had to put the phone down. Poor, well-mannered American lady, who was only being polite to the silly, giggly British lady, who was being a bit immature 😉