Posted on June 4, 2015 by ukdesperatehousewifeusa

A Brit’s Midnight Musings on the American Dream

It’s been so interesting to read everyone’s comments on the American Dream from my previous blog this week. I am so very curious about it. It fascinates me muchly since I never really thought about it in any way shape or form before I arrived in the USA. Honestly, I just heard the phrase back in Blighty and it never really registered with me until I started living with Uncle Sam (note, I have not moved out of the family home and moved in with my ‘uncle’, I am simply referencing the US0fA in one of my favourite ways!). 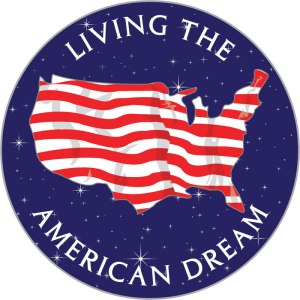 The concept of it all fascinates me. A discussion I had about it yesterday intrigued me when an American co-worker suggested that ‘it’s a bit like heaven; everyone has different ideas and ideals about it. It doesn’t exist in one form.’

So I wanted to share with you my thoughts, questions and musings about the American Dream that I had last night at midnight. They might not be coherent and they are in no particular order. They’re just comments and questions that popped into my mind, and yes, I wrote them down (as Dr Oz suggested so that they didn’t keep my awake any longer!).

If anyone has any answers or comments or suggestions, feel free to share! None of this reflection or cogitation is meant to offend or criticise; these are simply the bunch of thoughts that whizzed around in my little British head at midnight. You know, as it does.

So, that’s what I contemplated last night.

And for the record, I don’t know if I have an American Dream. I just have my dream. Although, to be honest, after this kept me awake last night I don’t think I dreamt at all!

My final note on this is something that I read on the Library of Congress’s website:

‘James Truslow Adams, in his book The Epic of America, which was written in 1931, stated that the American dream is “that dream of a land in which life should be better and richer and fuller for everyone, with opportunity for each according to ability or achievement. It is a difficult dream for the European upper classes to interpret adequately, and too many of us ourselves have grown weary and mistrustful of it. It is not a dream of motor cars and high wages merely, but a dream of social order in which each man and each woman shall be able to attain to the fullest stature of which they are innately capable, and be recognized by others for what they are, regardless of the fortuitous circumstances of birth or position.” (p.214-215)

The authors of the United States’ Declaration of Independence held certain truths to be self-evident: that all Men are created equal, that they are endowed by their Creator with certain unalienable Rights, that among these are life, Liberty and the Pursuit of Happiness.” Might this sentiment be considered the foundation of the American Dream?

Were homesteaders who left the big cities of the east to find happiness and their piece of land in the unknown wilderness pursuing these inalienable Rights? Were the immigrants who came to the United States looking for their bit of life, liberty and the pursuit of happiness, their Dream? And what did the desire of the veteran of World War II – to settle down, to have a home, a car and a family – tell us about this evolving Dream? Is the American Dream attainable by all Americans?

Thomas Wolfe said, “…to every man, regardless of his birth, his shining, golden opportunity ….the right to live, to work, to be himself, and to become whatever thing his manhood and his vision can combine to make him.”

Is this your American Dream?’

So, that’s it. I just wanted to share that with you so you might want to pootle off and have your own set of musings on it all. You know, like when you’re supposed to be at work and then you drift off and start contemplating the meaning of life and wot not. It appears from this Library of Congress note that the suggestion is that everyone has their own interpretation of the American Dream.

I like this idea and I shall take it away with me for more midnight musings, or perhaps over a nice cup of tea 🙂

Peace! And keep on dreaming!