Posted on May 26, 2015 by ukdesperatehousewifeusa

This morning I got up at 515am to go down to DC to appear on the Good Morning Washington show, presenting a segment about insomnia and all the fabulous new products out there to promote healthy sleep. It’s slightly ironic that I did this, since I am a terrible sleeper and probably only got about 4 hours sleep prior to the show.

Anyway, it went super well and I even got to say the name of this very blog on the show, which is awesomeballs! You can view the segment here (tho it’s not great sound for some reason!)

But as usual, when I go down to DC, it all got a bit desperate as I tried to find my way out of the city. I always get effing lost and at one point I really was a desperate Desperate Housewife in Washington! How come I take one way into the city and another way out? I can never figure it out, and neither can my frigging Sat Nav! But, I made it back to Columbia – hoorah!

I don’t think this USA mailbox needs any words except one – ‘kitsch’. I love this amazing thing in Howard County, MD! 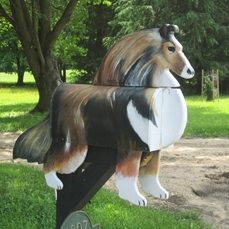 My mother will probably be blushing as she reads this, but it has to be told! When my parents came to stay the other week, my mum had to go and post and letter in a USA mailbox and could she find the handle to pull down the opening and post in the letter? Could she heck! It’s not like putting a letter through the British red post box, let it be known! (FYI, she managed it in the end! 😉 )

Having my parents here in America is always an interesting and fascinating juxtaposition of Britishness in America-land.

There is an idyllic place in Maryland that we had not frequented before. To get there, though, you have to go over the ruddy Bay Bridge which I hate, but it’s worth it!

Mrs Doubtfire or me?!

I got told an interesting tale at the weekend by a couple of lovely #hocohomos whom I’ve been very good friends with for a couple of years now here in Howard County (read about when we met up here!)

When I first got invited out by one of the group who had been reading my blog, apparently the other guys were not too keen to spend time with a dull ‘British housewife’. They told me they were expecting some boring old Mrs Doubtfire character and up popped me, much to their relief!