Posted on May 20, 2015 by ukdesperatehousewifeusa

Where’s a Daisy Duke-wearing, cowboy boot-wearing UK Desperate Housewife going to go when there is a child-free long weekend on offer? Only Nashville of course! And Memphis, second of course!

I like a bit of Johnny Cash. In fact, I used to listen to San Quentin in my boarding school common room, circa 1987. That’s how far-reaching The Man in Black is.

Nashville meant these things to me: music, Honky Tonk Row and, er, wearing my beloved UK Desperate Housewife boots which are from none other than Nashville its very self.

If you want to listen to country music and bluegrass and to visit Music City’s Grand Ole Opry in hope of catching The Next Big Thing or an old country celeb, then this place is for you.

Being a Brit in Nashville, I chanced upon a lot of other Brits, cos there are a lot of British country fans out there. You could generally hear them first because after a song they would shout ‘lovely’ or ‘very good’ and clap enthusiastically, but not necessarily whoop or cheer like the other [American folk].

I wanted to learn stuff in Nashville. I did. I learned a lot about Johnny Cash, whom I now respect even more. I learned stuff about Kenny Rogers, and now see him as more than a beard and chickens and Islands in the Stream with Dolly. The Country Music Hall of Fame is totally brillopads! I feel utterly ‘countrified’ 😉 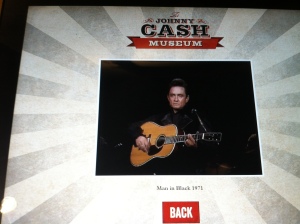 I wanted to see some bluegrass being performed. I did. I don’t know who the band was, but they were super popular and I loved them as much as everyone else. It made me want to watch Oh Brother Where Art Thou again. 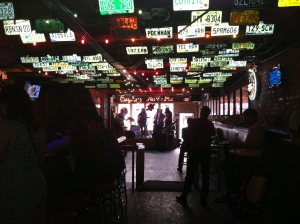 I wanted to be part of the Grand Ole Opry. I was (not on stage tho!) It was amazeballs, and I totally love a bit of fiddling! Watch out for this name: Ashley Clark. He’s wicked with a fiddle (and the gals love him!). And there was some dude called Charles Esten from the TV show Nashville, who everyone was was very excited about, but I don’t watch it so I had no idea, but he was very talented and charming nonetheless! 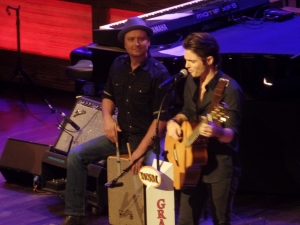 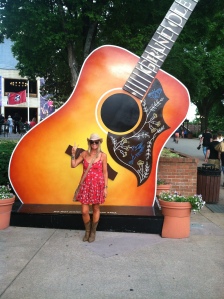 I wanted to get on down at one of the honky tonks. I did just that! Live music bars are easy to find on Broadway, Printers Alley and 2nd Avenue. Some top venue picks include The Bluebird Cafe, Tootsie’s Orchid Lounge and Robert’s Western World. Dancing on the bar? Yes sireeeee! 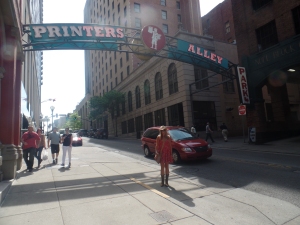 I was rather too excited about the Dukes of Hazzard museum at Cooter’s Place. I was right to be so! Ah, Daisy Duke, my heroine in short shorts 🙂 .

Check those Daisy Dukes out! 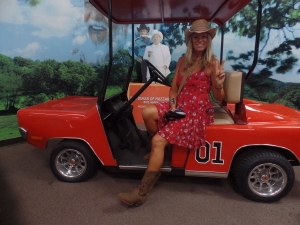 BB King died on the day we were there, so it felt only natural to go hang out with King’s house band for lunch. I’m glad we did.

In honour of the legendary BB King 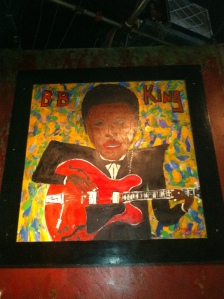 Next up: Memphis, blues, soul and Beale St.