Posted on March 14, 2015 by ukdesperatehousewifeusa

Red Nose Day in the USA

We Brits like our little customs in America-land still. And one of those is the event that is Red Nose Day / Comic Relief.

What’s this all about? ask my American friends.

Well, it’s a combination of all the people who I love most off of the British telly (comedians like Dawn French, Alan Carr, David Walliams etc) doing skits and wotnot and funny stuff, and hard stuff like swimming the Channel to raise money for good causes. And there is Davina McCall, a lot. Like, too much.

In the UK, Red Nose Day has been inspiring the public to raise money for the past 25 years and it unites the nation in fundraising to help poor and vulnerable people at home and overseas. We Brits love it!

So, my British friend organised a smashing event to raise money as only we Brits know how. 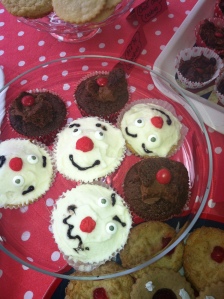 And all this fun is coming to America in May 2015! I do wonder how America will pull it off; I look forward to finding out! Will Americans really find it funny to walk around with giant red noses on? And who will replace Davina McCall? Anyone will do!

This happened in my house this weekend, courtesy of The Queen’s Grocer who sells British food. This was the American reaction to British bacon: ‘Wow, it has no fat on!’ Get yer chops round this lot!