Posted on February 1, 2015 by ukdesperatehousewifeusa

British stuff wot I spotted in the UK

These are some of the things that amused me and that charmed me whilst I was in the UK. Just take a look at the gallery 🙂 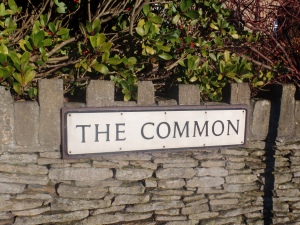 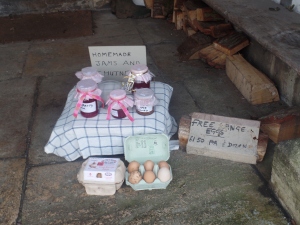 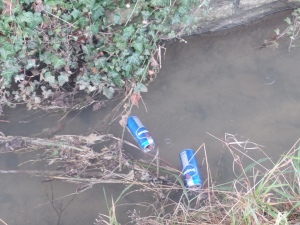 Some cans in a river. Bloody toerags! 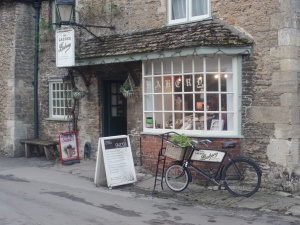 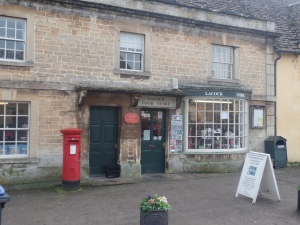 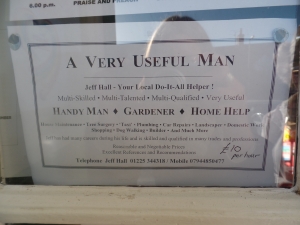 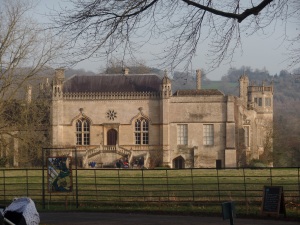 Here is the final and super interesting installment of Brit Caroline’s Austin, Texas adventure so far…. (it all seems so familiar to me!)

One month in and three new changes happened: one, our shipping finally arrived, two my parents arrived from England for a fortnight and three after lots of discussions with other mum’s I felt the time was right to let our eldest daughter start going to school on the bus. Our shipping was booked to arrive at 10am now I was expecting it to be a bit late as these things tend to be, but almost four hours later the container finally arrives after travelling 4847 miles from England unscathed (I googled the distance) a few miles down the road it got stopped by state troopers, nothing to report just a routine search but they decided to just take their time!

Mother’s Day arrived here on May 11th so we decided to celebrate on that date rather than in March mainly because it was easier for the children as we knew the school and preschool would be doing their usual Mother’s Day craft work that week, a lovely lay-in, creative cards from the children, breakfast in bed, a beautiful flower delivery and dinner at a great local Italian restaurant was well worth the wait.

After about nine weeks I felt a real sense of homesickness I know this is a normal reaction for anyone to experience on any level, we love Austin and are very happy here so I guessed this was part of the transition process that could strike at any time. Some days I felt life was very similar to England then when someone heard my accent and I’d given an overview of why we are here, watching their reactions really brought home what a huge change we’d made and how new everything still is. 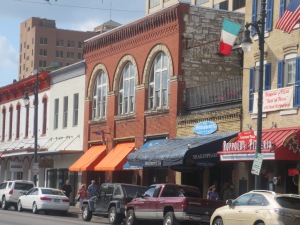 We finally got to the never-ending three-month school holidays, I knew a few mums from school by this point so I met up with someone different about once a week, every Wednesday the girls did swimming lessons, I made every Thursday my day to take the girls on a long day out to places such as the zoo, museums, indoor play-zones, they also attended a summer camp and we also flew to England for two weeks.

I was initially very nervous about my first flight on my own with two children I sat us all directly in front of the gate entrance so there was zero chance of us missing the boarding, everything went so smoothly I wished I hadn’t worried so much. For a few days it was disorientating being back, how come I never noticed how small the roads are before. I then picked up my hire car and stalled it at the first traffic lights because I forgot I wasn’t driving an automatic and strangely it took a few days before I got back in the swing of driving on the left again. It was great to wake up to hear seagulls and smell the sea air, plus a walk to the corner shop seemed a novelty too. Every day and most evenings we met up with someone different, I wanted to squeeze in as many people as possible as we probably would not be back again for a whole year, after returning to the UK for two weeks many people asked me how did I feel to be back in America? Well I am pleased to say I felt glad to be back in Austin for numerous reasons, my husband, the weather, the lifestyle and we felt we had already built some great foundations for us to live here very happily.

One weekend after the summer we attended our first music festival ‘Austin City Limits’ we took the girls straight after school on the Friday and after queuing for an age we were in, it was hot and we had no idea where to go so we just went straight to the beer tent of course, one wine, one beer, water for the girls and we were ready, next stop was on the grass for Paolo Nutini which was great fun, a bit of pizza later we then found another stage, pitched up far back again and settled on the grass for Sam Smith, the girls loved dancing along to the music and making friends with the children sat next to us. The next day it was raining heavily and some of the acts were cancelled but by the time we had dropped the girls off with a sitter, got some lunch and headed home to switch the flip-flops for wellies the sun was out and our enthusiasm has been revitalised. We were excited to see Iggy Azalea she knocked out some good tunes, we met up with some friends and got set up in a fairly good spot for Lana Del Ray, then my favourite of the whole weekend Eminem came on stage, such an amazing set and still a massive entertaining star! 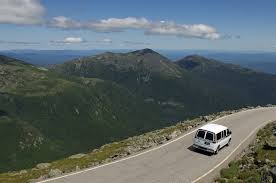 The day had finally arrived to do my driving test 19 years after my first one, the week before and on the way to the test centre I was concentrating so much on keeping both hands on the wheel, must keep looking over my shoulder as well as mirrors, must completely stop behind lines at crossroads etc. that as I started driving out of the car park towards the road to start the test I suddenly realised in horror I was driving on the left hand side…..aaaaahhhhh. My tester said as long as I didn’t do that on the roads I’ll be fine I mumbled my apologies and blamed my nerves!

In all the films Americans have always seemed to make a huge deal of Halloween but I had no idea that people would start decorating their houses a month before Halloween, huge 4ft wide spiders attached to fake webs on houses and bushes, 8ft skeletons with black cloaks hanging from trees blowing in the breeze, huge inflatable black witches cats everywhere, grave stones popping up in people’s front gardens then on the night of Halloween there was over three hours of trick or treating around the whole neighbourhood! 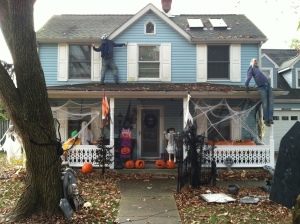 Even though English and Americans both speak the same language just! I have definitely had some vocabulary challenged experiences over the past few months such as the day I took my youngest into a hair salon to have her fringe trimmed and was mildly taken aback when the friendly lady said ‘oh you mean you want her bangs cut’ eeerrrr what?  I recently said to an American lady I was planning to wear hot pants to the Austin City Limits music festival, I could tell by her wide-eyed smiling face I’d maybe said the wrong thing, I googled the American definition of hot pants “a female who can’t control her sexual appetite-nympho” in fact what I should have said was ‘short pants’! One night we went for dinner with another couple, my husband still smoked then and when the couple asked where he had gone I said ‘oh he’s just popped outside for a fag’, in wide-eyed hushed tones they explained why I should probably stick to using the word cigarette to describe a smoker!
The children are now both at the same school and settling in so quickly it’s truly amazing to watch and they were both the ‘cool Brits’ for weeks, my eldest said the other kids would practice doing a British accent and she would give them marks out of 10! Both girls are picking up a Texas twang however if I ever let a word slip or drop a T they both stare at me and say ‘don’t speak American mummy’ in very serious voices. One of their friends had a brother turning one recently, his proud American mother said she had seen the outfit Prince George wore to his first birthday party, sourced where it was from and had it shipped over here for her own son to wear to his first birthday!

Thanksgiving arrived, no houses were decorated, there’s no present giving but the children are off school, husband is off work and we had been invited to a friend’s house to join them for their Thanksgiving dinner, we enjoyed some traditional dishes such as smoked turkey and sweet potatoes with marshmallows I would say the day felt similar to our Christmas day, shops were closed, everyone getting together cooking and drinking, kids playing outside and terrorising the dog! The day after Thanksgiving is called the ‘Black Friday’ shopping day, we had been advised by numerous people to stay off the roads and away from shopping malls as it is a jungle out there on this day and watching the news I’m glad we did.

The lead up to Christmas was not quite as rambunctious as I was expecting, no nativity play at school, most establishments had minimal Christmas decoration and after numerous shopping trips, two school ‘winter’ parties, reassuring the children that Father Christmas will still find them in Austin and my husband’s family arriving Christmas eve, our first Christmas day in America had finally arrived, it started as a lovely warm day and after breakfast, opening presents and us all wearing Christmas jumpers we head out for a walk around the neighbourhood and the local lake, this resulted in a few compliments from passing Americans on our matching attire! The afternoon was a typical English Christmas day of late turkey lunch, drinking, catching up with absent family, TV watching and taking it in turns to play with the children until it was time for bed.

We have almost completed our first year in Austin and some days I feel we are on top of the world and that life could not get any better and sometimes I feel sad, homesick and I just want to feel like I fit in and not feel like the token Brit everywhere I go. When I look back on 2014 it has truly been a whirlwind of craziness, surreal experiences, fun and laughter, business for my husband is going extremely well so all is looking promising for us to stay another few years. What this space!