Posted on February 1, 2015 by ukdesperatehousewifeusa

Take out boxes/bags USA vs UK

I love the American take out boxes in restaurants. It means you don’t have to eat all your dinner in one go – save it for lunch = economical! Nothing is wasted! You can just ask away for one and your server brings one right out, job done.

Not so, dear friends, in the UK. When I asked for one in Bill’s restaurant in Cheltenham, the server was confused as to what I was asking for.

‘I can’t eat both fish cakes,’ said I. ‘I’d like to take the remaining one home and have it later for my supper.’

Well, after much discussion, the chap brought me a bag. This is that bag. 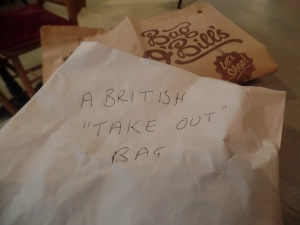 The British version of the take out box…

And I did take it back, and I did eat it later. So, UK restaurants, get with the program – take out bags, boxes, or whatever are a GREAT IDEA!

Get your tea cups at the ready, British expats! We have some work to do! What?! Why?! ask the Americans. Because you’re banning our far superior chocolate. That’s why!

Aren’t there other more concerning, more important, more fundamentally dangerous things being imported to the USA than a lovely, melty, creamy, velvety, delicious piece of chocolate?

I am cursing myself for not bringing back a suitcase load of the stuff when I returned from a UK visit last week. I reckon I’d be a millionaire by now. And if I was, I would have a room made of Cadbury chocolate that I could eat bit by bit, and I’d film myself eating it and people would pay hundreds of dollars just to nibble on my chocolate room. Fact.

There’s a petition to get the decision reversed, set up by my chum Nicola Edwards from The Queen’s Grocer who imports British foods for her USA store. You can sign it too, if you value your taste buds. Her business will be seriously affected with the ban in place, though you can still get your hands on her British bangers, which is good news.

If, like me, one of your weaknesses comes in the shape of a Toffee Crisp, Maltesers, Yorkie, Cadbury, or Rolo your taste buds may soon be challenged. Most every British person I know will say that Hershey chocolate sucks big time. Including me.

Many Brits who live in America make sure they know where they can buy their comforts from home: decent tea, biscuits (cookies), sweets (candy) – and anything made in Britain by Cadbury. It’s that little slice of home that makes you feel, for a small moment, that you’re back home.

I love me some British Cadbury chocs – that’s just the way my taste buds roll. So, get signing the petition, folks, and let’s get these chocs back in our gobs, as us Brits would say!

The Super Bowl is currently on as I write this blog. I don’t really have much interest in American football. I have tried. mind you, and I did enjoy February 2013 when the Baltimore Ravens were playing, because the atmosphere round these parts rocked.

But I confess to not having given a rat’s arse about this one. 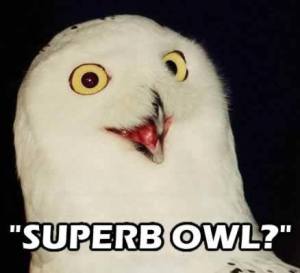 This is what I do know, or at least think I know, and some of it might just be a load of crap, and most of it was gleaned from the Daily Mail showbiz site, so take it as perhaps not being anywhere near the truth…..

1. Some dude called Tom Brady is playing and he is married to the supermodel Gisele and he had a cold recently. He plays for the Patriots and they are in New England.

2. Recently two comedians did something which was meant to be funny as part of the Super Bowl publicity. I don’t know what it was they did.

3. Katy Perry is singing at half time or during the interval or whatever they call it and people can buy tickets for about $12k to see her do that and then watch a load of commercials that have, gasp, never been shown before which are selling, gasp, stuff Americans don’t really need, but which they will, gasp, now go and buy because they saw it all during, gasp, the Super Bowl (so says the marketing powers-that-be).

4. Obama is being interviewed at some point. About what, I’m not sure. But that’s the sure-fire way to speak to and get the attention of all Americans all on the same day.

5. Bloody millions of chicken wings get eaten by Americans during the Super Bowl. I’m having kale soup, for the record.

6. A lot of money is spent on the Super Bowl and I was kind of hoping that, instead, some of that money would go towards education and community projects in neighbourhoods that need that kind of thing, but who am I to judge or suggest such things….

Have fun, Super Bowl fans, and I choose the Patriots….wait, no, the Seahawks. Oh, who cares….Andy Murray lost the Australian Open. 😦 / 😉