Posted on January 1, 2015 by ukdesperatehousewifeusa

Ham and eggs with The Lord in South Carolina

On roadtrips we make it a mission NOT to eat in chain restaurants. That’s sometimes easier said than done when the road sides are adorned with signs indicating hundreds of McDonald’s, Chick-Fil-As and other such fast-food stuff and nonsense.

But we find them if we hit the back roads, and we stumbled upon this Southern gem:

Ham and eggs with the Lord

This restaurant showed us a particular brand of Southern Charm – that is, ham and eggs and large lashings of coffee served by Pat and ‘The Tarts’, who were sweeter and friendlier than you can imagine, and they sure don’t like anyone to swear when they’re eating their brekkie. Plus they had mountains of hairspray on, and I was waiting to see if their heads caught fire when they went into the kitchens. They didn’t.

Pat did tell us that she found people from the North very rude, when we told her we were living near Baltimore. ‘They just ain’t polite like us Southerners,’ she declared. So beware, Notherners, you might not get such a sweet dollop of Southern Charm if you visit Pat….

Being in the Triangle Waffle House felt like being in a movie. I expected Samuel L. Jackson’s character, Jules, from Pulp Fiction to walk in at any moment and deliver us from evil with his words from the Lord whilst we ate our easy-over-eggs. (I love being asked how I want my eggs, and I never truly know what ‘easy over’ or ‘sunnyside up’ actually mean, so I just say one or the other because I’ve heard it in the movies and then I see what I get. 😉 ) 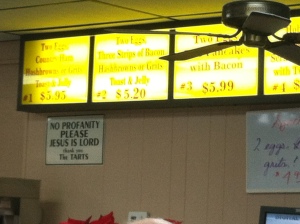 No cussing in The Waffle House, say The Tarts

We cannot get our heads, or mouths, round grits. They are unappealing dollops of coarsely ground corn kernels boiled with water or milk. My husband has determined that they are only palatable if eaten with maple syrup, bacon and butter. Oh my.

Grits, you will not be making an appearance on our British menu back in the UK. We’ve tried ’em, and they can stay in the USA!

Next up: the Dixie Confederate Store, Cafe Risque and passing through some reality…..