Posted on December 31, 2014 by ukdesperatehousewifeusa

The Christmas Roadtrip ‘Down South’

Before we start at the beginning, we need to start at the end. The end happened yesterday and I declared that, whilst the trip had been brillopads, that was enough roadtripping for me for a while, what with California in the summer and this 10-day marathon. The truth is, I’m just not that into sitting down for long stretches at a time, and if you want to roadtrip and see America, you kind of have to do that.

Anyhow, back to the start!

Our aim was to  take in some of the South and so a route was planned to take us through Virginia, North Carolina, South Carolina, Georgia, Tennessee and West Virginia.

The thing about Virginia is that it ain’t that different in style and architecture from Maryland, and I always want to take in a ‘different’ America – to taste, smell and absorb a different place, to see and meet different people, to hear different accents, to view different houses, landscapes and skylines. Virginia is pretty much like Maryland for me, except they’re a little more Southern….

But, I don’t know anywhere in Maryland that does Chicken Poop Bingo. WTF is that I though? Well, it’s this:

You buy tickets and crowd round a coop, coaxing a poultry pooper to pause over a particular square on a grid of numbers. The chicken can take its time, so there can be some nail-biting waiting, or it goes right ahead and takes a dump straight away to much excitement. Mostly, though, they take their time.

If I was getting stared at by a bunch of strangers, I probably wouldn’t be able to go, either, especially if I wasn’t going to win any of the cash.

If the chicken poops on your number, you win. Simples. Then you move to Cow Pat Bingo, which is bigger and smellier.

I like North Carolina because I really liked the people. We met some super-friendly and super smart folks. And Chapel Hill is super-progressive and full of character. Respect Chapel Hill.

We got the whole ‘where are you from?’ and ‘I love your accent’ thing a lot whilst in this State, and I just had to reply to one lovely lady: ‘But I love your accent!’ I do! Southern accents rock!

Um, what do I do here, I asked….will I be stopping off to get a packet of Rich Tea and a Chocolate HobNob?

Don’t be silly, Claire, these are American biscuits, which = rich, fluffy, and big-as-your-head type scones, along with eggs, bacon, cheese and wot not on top or inside or both, and you have them for breakfast, lunch, or dinner, or all three if you fancy it.

This particular biscuit recipe is based on the owner’s Grandmother’s recipe and these biscuits helped give her the stamina to give birth to 17 children and live to almost 100. Wow.

The award-winning Chapel Hill location is a Drive-Thru Only Restaurant and is voted as the Best Breakfast in North Carolina. Fact. I didn’t have one, though, sadly. 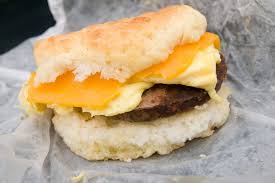 Next up on the blog: Ham and eggs with The Lord in South Carolina, Southern Charm and Grits.