Posted on December 16, 2014 by ukdesperatehousewifeusa

The Best of British

And lo, just three weeks before Christmas, I find just what I am looking for! Hiho Silver is a smashingly authentic British silver place with some divine pieces, and they’re all sort of country-fide and Britishy and horsey! I can imagine her Highness Duchess Kate sporting a few of these pieces when she’s doing her rounds at the Badminton Horse Trials 🙂 .

Kate doing her thing at the Badminton Horse Trials

What makes this jewellery so exquisitely British? Well, Hiho Silver is based in the UK in the Somerset countryside, in an old piggery where it’s not unusual to see a herd of cows or a flock of chickens charge by the window or for the animals to follow the staff through the Hiho office. I am not messing with you.

The jewellery is based on ‘countryside lifestyle and equestrianism’ and is aimed at everyone in the ‘country’ scene in the UK. Yep, I am reckoning Zara Phillips has got her mitts on a few pieces in her time.

Anyway, chat away as I do with folk, and the lovely people at Hiho Silver like the Britishness of my blog in the USA, and they have offered a little give-away of one of their fabulous pieces to readers of this blog! You can give it to a loved one, girlfriend, wifey, lover or chum, or just keep it for yourself! 😉 You can wear it with some wellies and pretend you’re all British and wotnot and like to drink Pimms and tea and say ‘Fancy that’ a lot.

Would you like to win a piece of Hiho Silver jewellery? Yes, Brits or Americans, or readers of this blog anywhere in the world, you can get this piece sent to you as a little silver treat! It’s a Silver Sterling Beaded Friendship Bracelet and it’s simply stunning. 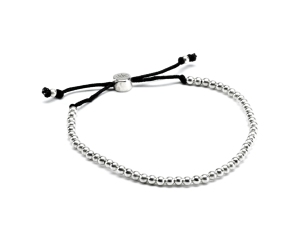 You can win this!

Just answer this question and email me at clairebolden@hotmail.com by Friday 19 December with your name and address, or inbox me at the Desperate English Housewife in Washington Facebook page! I’ll announce the winner Friday 5pm USA time!

Question: Who is Zara Phillips married to?

Lovely Zara (who lives in Cheltenham, don’t ya know!)

And that’s my Christmas gift to you, dear blog readers!

There’s a great story behind Hiho Silver, which bubbled forth as an idea some 20 years ago, on a Thai ferry round the islands. One of the founders, Andrew and his sister, had just spent the last two months travelling in India and Thailand and were heading to the islands to relax and to do some diving. They were sat on a sack of potatoes next to a really chatty American man named Willy and over the next few days (and several bottles of Mekong whisky, very hot tom yum soup and some beautiful dives) they made a real friend for life.

Willy had started a business selling Mexican jewellery in the US and offered them the chance to bring the idea over to the UK. They literally jumped at the chance of going on an exploratory trip to the US and Mexico and whilst over there, planned the first show which went well and paid for stock for the next show, and so, with a wallpaper table, a purple velvet cloth and a rucksack of silver, the Hiho Silver story started…

Within four years, Hiho Silver was doing two hundred retail shows a year at venues like Henley Regatta, Cartier Polo, Glorious Goodwood and Badminton Horse Trials and then fourteen years later had a number of shops in small market towns with a fabulous team of people running them. You can’t get more of a British success story at British events than that!