Posted on December 15, 2014 by ukdesperatehousewifeusa

I love talking in my British/English accent in America – it’s been a useful tool. So useful that I am due to be the dialect coach for Chesapeake Shakespeare Company’s upcoming production of The Importance of Being Earnest by Oscar Wilde in the new year. #chuffedtobits

It will be interesting to work with American actors to perfect that high class British accent. I’ll have them all talking like Judy Dench and Rupert Everett in no time.

We went to the British Embassy in Washington DC this weekend for the kids’ Christmas party. As we drove past the Embassies from the other countries along the route, my UK friend was in awe at the grandeur of the buildings. Then we came to the British Embassy, which, quite frankly looks just like a 1970s civil service building in Slough. 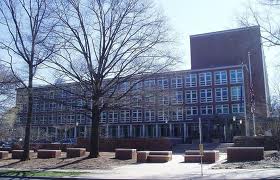 The Ambassador’s Residence is all together different, thankfully. It’s all very posh and smart, but when I am there I do think I have stepped back into the 1950s. Not a place to wear leopard print boots, I gather. Sadly, I don’t own a twin set and pearls to fit in there 😉 .