Posted on November 15, 2014 by ukdesperatehousewifeusa

I can’t say too much about my ride-along cos of the confidentiality with the Homicide Department whom I rode along with last night, but I can say this:

1. It is like The Wire in areas of the city. The cops said the show is totally realistic in parts. I saw ‘The Corner‘, made famous by David Simon.

2. I have a new respect for the guys and gals in the Homicide Department.

3. Apparently Baltimore has more murders in one week than the entire nation of Canada does in a year (Is this true?! NOT a police fact, but an interweb fact…). It is kind of crazy to drive along with police and them point out where murders and shootings took place.

4. The humour of the Baltimore cops is very piss-taking in a familiar British way 🙂 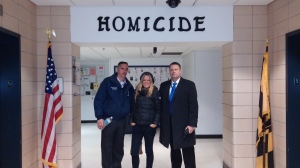 Life on the streets

5. Even criminals don’t like the cold. The cold keeps them off the streets, it appears. The junkies, however, apparently don’t feel the cold.

6. There are so many boarded up houses in some districts, it’s amazing that people are still hanging around on the corners.

7. This quote hanging from a detective’s desk interested me: For a plot hatched in hell, don’t expect angels for witnesses.

8. Baltimore is an eclectic city. It’s awesome and scary and cultural and poor and rich.

9. Baltimore is lucky to have the police department it does. I was in safe hands.

Respect to the cops

10. Finally, some people did not get why I wanted to experience this police ride along in one of the murder capitals of the USA.

I posted on Facebook that I was hoping for some action on the ride-along and someone commented ‘there will be “action”- not sure it’s the type anyone really wants to see’. But, you see, I did want to see this type of action, because it’s intriguing, fascinating and I’m curious.

I asked the cops when we were in some of the more intense areas that we drove through what would happen if I got out and walked along the streets or in some of the project complexes. They told me I didn’t want to know….