Posted on November 9, 2014 by ukdesperatehousewifeusa

I honestly, truly don’t crave much British food here in the USA. I really don’t. Unless it’s put in front of me, that is, and then I can shove down a Flake, some sausages, toffee, some Scampi Fries, Mars Bar, and definitely some Shepherd’s Pie with the best of them.

There’s a hell of a lot of us Brits in this here Maryland community and we all like to support each other’s ventures. Many Brits read this blog for example, and for that I thank them. And Nicola Edwards is a lovely Brit in Odenton, MD who’s set up The Queen’s Grocer, an online store that provides British food, goods, and gifts ‘with royal treatment customer service’. 😉 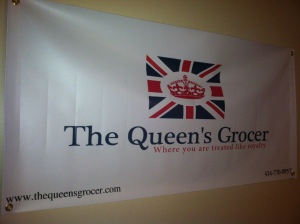 So, what do British treats and food stuffs look like? 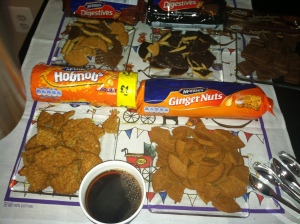 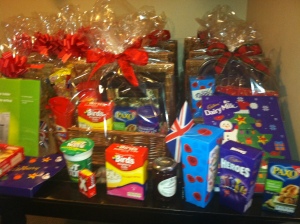 Spot the Pot Noodle (not our finest British culinary moment 😉 ) 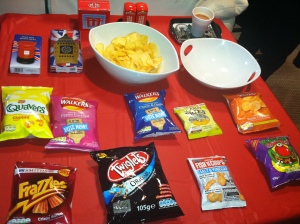 The best selection of crisps ever! 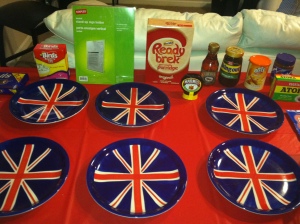 The best thing today was the Shepherd’s Pie – fabulousness! I’m told the key ingredient for this recipe is Bisto gravy. Fact.

Get yer chops round that, me luvvers!

Me and my British gal pals, who’ve been in this here land of Uncle Sam for yonks, but who retain their British accents and sense of humour, munched our way through the tasters and placed orders for various things (FYI, Scampi Fries and British sausages for me 😉 ).

But…. this is a confession that will shock many British friends. I can’t stand the taste of British bacon anymore. I love American bacon! And whilst British bacon might be one of the things that many Brits hanker after, it’s not for me. Sorry Brit chums. 😉 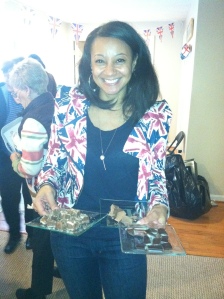 Nicola is The Queen’s Grocer

And, yes, I know we can get some of this British food stuff in the stores round here like Giant and Wegmans, but it’s really important to support personal ventures in our community like Nicola’s so I hope, if you are a Brit here in the USA, you’ll place an order for the things you love, and if you are an American and just fancy trying out some British stuff, go for it!

Me and the Brit gals with the Queen, innit

I’ll definitely be placing a big order for St George’s Day celebrations next year. Hoorah for that!