Posted on September 1, 2014 by ukdesperatehousewifeusa

Apparently, it’s nearly time for Homecoming in the US high schools. Despite hearing this phrase a lot in movies and wot not, I don’t actually know what this means, since we don’t have it in the UK.

It means this: ‘Homecoming is the tradition of welcoming back alumni of a school. It is a tradition in many universities, colleges and high schools in the United States. It usually includes activities for students and alumni, such as sports and culture events and a parade through the streets of the city or town and the traditional Homecoming dance.’

Right, so if I get this straight, older dudes and chicks who have experienced something of the world come back and impart their knowledge and experience about what actually happens in college, fraternities and sororities and all that shenanigans with the innocent young high schoolers. And as an innocent young high schooler you get to hang out with college dudes. Excellent, sounds like fun! Where can I get a ticket to the dance? 😉

The USA does chicken wings

My British mate over here loves American chicken wings. He says he doesn’t know what he’ll do to find an equivalent back in the UK. I admit, they’re pretty special on the old Americana menu. But just why are they soooo popular?!

I think Buffalo chicken wings may have become the country’s favorite football-watching food, cos every match I’ve seen they make an appearance. There are rumours that the USA is running out of wings because the wings have become the most expensive part of the chicken due to their popularity when fried and covered in Buffalo sauce. Ah, that Buffalo sauce, or Old Bay Spice (a Maryland fave!).

A Buffalo chicken wing, hot wing, or wing, in the cuisine of the United States, is generally deep-fried, unbreaded, and coated in vinegar-based cayenne pepper hot sauce and butter in the chicken. They are traditionally served hot, along with celery sticks and/or carrot sticks with blue cheese dressing for dipping. Yes, they aren’t that healthy, but they are very ruddy tasty! 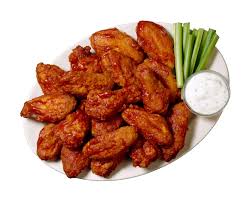 There are several different claims about how Buffalo wings were created, but the most popular one is this:

Buffalo wings were first prepared at the Anchor Bar in Buffalo, New York, by Teressa Bellissimo who owned the bar along with her husband Frank. This is the story….

Upon the unannounced, late-night arrival of their son, Dominic, with several of his friends from college, Teressa needed a fast and easy snack to present to her hungry guests. It was then that she came up with the idea of deep frying chicken wings (normally thrown away or reserved for stock) and tossing them in cayenne hot sauce.

They say: “It was Friday night in the bar and since people were buying a lot of drinks he wanted to do something nice for them at midnight when the mostly Catholic patrons would be able to eat meat again.” He stated that it was his mother, Teressa, who came up with the idea of chicken wings. There was mis-delivery of wings instead of backs and necks for making the bar’s spaghetti sauce. Faced with this unexpected resource, Frank Bellissimo says that he asked Teressa to do something with them.

However they were invented, they are a certain staple of the American eating-out diet and I can’t think of our British equivalent just yet…..