Posted on August 25, 2014 by ukdesperatehousewifeusa

Back with the Amish

One of the places in the USA that made an impression on me the first time I visited it was Lancaster, PA and the Amish country.

I wanted to go again to feel its surrealness and other-worldliness. Even on a Sunday, when the Amish are at church and nothing much is open, it feels like you’re entering another decade, domain or parallel universe.

Plus, which is most excellent, I got a buggy ride from a hot young Amish guy who had dropped out and was in the final year of his ‘Rumspringa’, or ‘running around’. If I had been a 20-something gal, he could have run around all he wanted with me! 😉

He shared quite a compelling story, coming from a strict Amish home of six children, and, as the youngest, has witnessed his offspring doing all sorts of things they shouldn’t during their Rumpspringa. He went off the rails completely, he said, getting into all sorts of trouble with the law, but he was kind of back in the fold training horses and wotnot, but I’m guessing he won’t stay from the way he talked about the lifestyle. And he looked way too hot in jeans, Wayfarers and a polo shirt to be hiding it all under a hat and beard and half-mast trousers.

This was the best pic I could get of him! 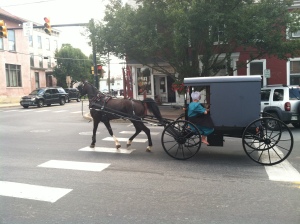 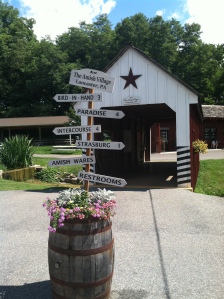 Oh hahaha, heeheehee, this is what’s known as a right British COCK UP!

British diplomats in the US have been forced to apologise after revealing they were hosting a party to celebrate the anniversary of the burning of the White House. Yes really!!!

The British Embassy in Washington held a ‘White House barbeque’ yesterday to mark the two hundredth anniversary of Britain capturing the US capital and setting fire to the President’s iconic address.

The Embassy even sent a message on Twitter from its official account with a photograph of a White House cake, flanked by British and American flags and surrounded by sparkler fireworks.

Here is that tweet that has now gone viral.

So, er, sorry about that American folk. We still friends?! 🙂