Posted on August 19, 2014 by ukdesperatehousewifeusa

How to say New Orleans

Right, before we get started on the New Orleans blog, let’s get it straight about how to pronounce this place.

I, being a Brit, have called it plain and simple ‘New Or-leens’.
But, my chums here in America-land tell me it’s ‘N’awlins’.
But, some dude on a tour who’d lived in the city for his whole 72 years told me it’s ‘Noo-oor-lins’.

To be honest, say it how you want, because by the end of your night in Bourbon Street, I pretty much guarantee you won’t be able to say it at all 😉 .

Anyway, I tried and I tried to say it like the locals do, but I just sounded like I was trying to do a bad Scarlett O’Hara impression, as per this:

How New Orleans won my heart

I get that for some people New Orleans holds little or no appeal. In fact, many folks quite happily wrinkled their noses and sneered at New Orleans when we said we were visiting. Others rated the place, and they obviously remembered the good times they had there cos there was definitely a twinkle in their eye…! 🙂

But, for me, this is what MAKES New Orleans. It is all the above and much, much more besides.

I like the swampy heat; Bourbon Street amused me; I got used to the smell and it was no bother; I saw NO crime (though the sirens told me it was there!); I was broken-hearted by the impact of Hurricane Katrina in some of the neighbourhoods around the city.

But, most of all I liked the city’s vibe, the mix of cultures, the art, the history and ghost stories, the music, the houses and the architecture, and the people.

Happy to be in New Orleans! 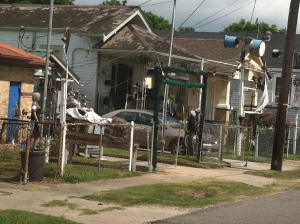 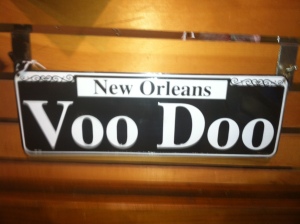 Some strip clubs were better at promotion than others… 😉

Next up: what is it that I love about the city of New Orleans, the culture, the history and ghost stories, the food, the music, the houses and architecture, and the people? Find out!