‘Ya gotta see the elephant seals when ya stop off on ya drive along the coast. They’re awesome’ says an American lady to us.

And they were awesome, she was right.

Hundreds of the noisy buggers! 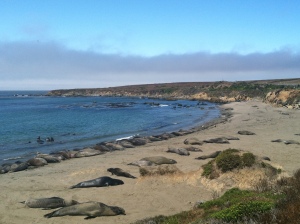 They made me laugh. See 🙂

We spotted the seals along our route from Santa Barbara to Carmel, and it would be very remiss of me not to write about Santa Barbara, probably because my hubby and I both agreed we could definitely live there.

Santa Barbara was described to me as ‘what everyone thinks LA is going to be like, but isn’t’. I get that. I think in my head there would be bits of LA like Santa Barbara.

SB is flat and lovely and has a fab beach and nature is in abundance and there is a bar on the beach and people are surfing and you get to do wine tasting and the shops are cool and you can walk everywhere and it has oodles of history. I do get a bit miffed when Brits take the piss out of America for ‘not having history’ because I find American history fascinating – particularly Native American history and the Spanish and Mexican history.

That’s why the Old Mission at Santa Barbara was so spectacular and rich in history and culture. It felt like I was in Spain, and boy it was HOT! 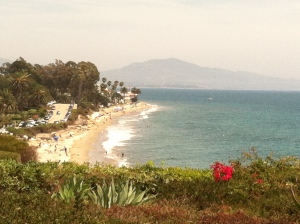 I love, love, love the beaches here – so peaceful 🙂

We were looking forward a great deal to Carmel. We had been told the beach was stunning and the town a delight, and the wine just delicious. Right again, on all counts.

I’m not a big fan of Maryland wine – it’s too sweet for me. The Californian wine, however, went down rather too well, and after several flights on a wine tasting tour, Carmel was THE place to be. I almost went hunting down Clint to see if he fancied coming out for a drinkie-poo, but I think he’s getting on a bit now and was probably tucked up in bed with his woolly socks on, cos it does get much cooler at night on the West Coast.

Carmel beach is a dream. White sand, blue sea (far too cold tho!) and a family of three dolphins happily bobbing up and down in the sea, flipping around, swimming back and forth. They were amazing to watch, as were the pelicans diving for a catch.

Carmel also was a place of meeting folks with a connection. One bartender was from Columbia, MD and used to babysit for my hubby’s boss! And one restaurant owner owned a house back in the UK where we live and knew the town and some people we know very well! It really is a small world after all, you were right Mr. Disney.

The other place people raved about was 17 Mile Drive. So, naturally, intrigued, we went for the drive.

Now, I think we must have come in at the wrong end of the drive because for the first six or seven miles we weren’t that impressed with the views or the houses.

Then – bam! Hello 17 Mile Drive in all its luxuriousness!

Quite, quite fabulous with its coastline, incredible mansions, golf courses and seals on the shoreline. Wow. It was like going from Aberystwyth to California gold coast in one short drive!

Personally, I think they should get rid of those crappy first six miles and call it 11 Mile Drive 😉

Next up: the final leg – San Francisco!