Posted on May 9, 2014 by ukdesperatehousewifeusa

Expats through the decades

Being an expat, I’m a little bit fascinated by the whole experience. It has an impact on you physically and emotionally, there is no doubt about it, and the psychological aspect of it intrigues me.

I was an expat teenager in Gibraltar and I loved it, but back then there was no internet or email. We wrote letters. Yes, those things that are made with pen and paper.

This is my piece for Global Living Magazine, which looks at the expat experience from the 1960s-2000s. (You can click on it to enlarge and read!) 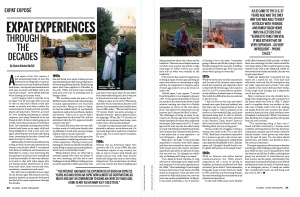 Expats through the Decades

And yes, that’s my mother and father in their bathing suits on a yacht in the Med! 😉

Sometimes I picture the UK ‘home’ image in my mind’s eye – I see Bath’s Royal Crescent, a village pub garden and a British high street. These are the funny little things that I see that I picture and remember when I get a bit homesick or a need to feel ‘in touch’ with my own culture. And I think about my friends and family, of course.

This quiz about the UK really intrigued me: what does the UK look like – have I got a romanticized view of it, or can I remember the reality? Do I think of all the beautiful things like British gardens and nature, old stone walls and amazing cities, and forget about the grim areas, the dreary motorways and the oddities that I sometimes even ignored.

When you return to your own country you can be blown away by some of it – I remember going back to the UK last year and thinking how green and pleasant it really was, and how easy it was to walk to places, and how funny us Brits are sometimes.

The cool thing about taking this quiz is that you can be in with a chance of ‘winning a 7 night break’. Is that back in the UK, I wonder? If so, where would I want to go?

I’m currently second on the leaderboard (I didn’t get them all right!) – have a go and see if you can figure out what the UK really looks like. 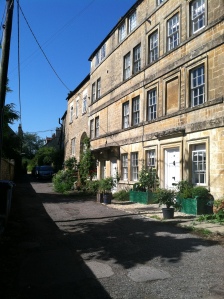 Back in the UK

You know, when you’re away from home things can become blurred and it’s sometimes hard to remember. 😦

Meet Elfa who moved 2000 from San Diego to Paris, for a few months, looking for an adventure (and a romance with a Frenchman). There she met ‘the loveliest British boy and vowed to make him mine’. She moved to London in 2002 to be with him. Initially she thought she was only going to stay for three years and then move to California together. But, she never expected to love living in London – and she’s still there now.

She is a mum to a six-year old girl, Moozles (‘not her real name just what we bizarrely call her’), and a two-year old boy, Dubz (‘not his real name either – what a shocker!’). She used to work in HR, but gave up her job after she had her son.

She says: ‘I enjoyed working 2.5 days/week but I loathed the hour commute into central London. Plus, I had always wanted to be one of those mums who walked her kids to school, made costumes and baked. It turns out that I am not very good at those things, but I keep trying. I sometimes help with the PTA, I make an effort to be a fun mum and I try not to shout (though I often want to). Sometimes I miss working, but am enjoying being a stay-at-home mum for the moment.’

She writes the USA in the UK blog Californian Mum, and I asked her what it’s like being an American ‘mum’ in the UK, because I find there are many differences being a British ‘mom’ in the USA. Our cultural differences sometimes are really obvious through our parenting styles.

“People often ask me what it is like being an American mum in the UK. I was never a mum when I lived in California so I cannot speak to the exact differences. I have lived in the UK for 12 years and it completely feels like home. But there are some issues I have in raising two children who ‘speak funny’. My son is two, so we aren’t grappling with many cultural issues. But my daughter is really British.

“Moozles, who is six, thinks it is funny to make fun of the way I speak. She is accustomed to the way I pronounce certain words, like tomato (‘tomayto’ rather than ‘tomahto’). But she seems to be realising that I pronounce many words differently. And she doesn’t just chuckle. She laughs and points as if my trousers have fallen down (oh yes, I say trousers instead of pants because in the UK your pants mean your underwear). She then repeats the word in my accent and laughs some more. At the weekend I noted how something was ‘hotter’. She over-pronounced the ‘er’ sound at the end (British people pronounce the ‘er’ sound like its ‘ah’). Then she had a good laugh.

“I brought this child into the world. I was the one who taught her to speak. I was her main role model until she began school at 4 1/2. And now she laughs at me. I am sure there will be more laughs as my children get older. But I guess all mums probably have to deal with this.”