Posted on March 23, 2014 by ukdesperatehousewifeusa

In the summer I am heading out to LA, and I’m not ashamed to admit that I am fascinated by the place, its celebrity culture, weather, lifestyle and differences from where I live. Owing to the fact that it is on the West Coast, I anticipate it being very different from the East Coast. 😉

Doing my research, I stumbled upon Gwen’s blog – she’s an Aussie expat who lives in LA and has embraced it fully. I love reading her blog about all the shenanigans there. It’s much better than reading trashy celeb mags! So here, for your enjoyment, is Gwen’s utterly fascinating Q&A about living in LA – 90210 don’t ya know!!!!

Hanging in the hills!

Gwen John
Bit about you: It’s hard to talk about myself with giving me a label. With that said, I’m married with two kids (a boy and a girl). I was an expat kid dividing my childhood between Australia (Melbourne) and the Philippines. My husband and I moved from Melbourne to Sydney and that’s where we thought we’d stay. We lived in Shanghai, China for a couple of years and now call LA home. I set up my blog (www.itstartedinla.com) as a means of keeping track of the surreal world we found ourselves in and establishing myself so I can fulfil my dream of publishing a book (I wrote a book when we lived in Shanghai but it’s as yet unpublished). If people like what they see I’d love them to sign up or like me on Facebook or follow me on Instagram.
Age: Thirty plus (a number years, possibly adding another 10 plus)
Occupation: Blogger for It Started in LA (previously a Marketing/PR Chick)
Time in the USA: Arrived in LA on August 14, 2013 which means we’ve been here around 7.5 months (not that we’re counting!).
Reason you came to the USA: My husband got offered a job in Hollywood, you can’t pass up that opportunity – not when every other man and his dog busts his gut to get here.

1. When you arrived as an Aussie expat, what were your initial impressions of the USA? Has it changed much since you’ve been here?

I first visited LA some 20 years ago. We did the usual tourist attractions — Rodeo Drive, Disneyland, Universal Studios and caught a taping of then-popular sitcom Growing Pains (where we actually met a fresh young Leonardo DiCaprio!). When we were on the plane outward-bound I looked and my then-boyfriend now-husband and said, “Been There Done That Never Coming Back”. Never say never huh?

When I arrived next as an expat my immediate impression was that LA wasn’t so bad and it was actually not as old and rundown as I first thought. I have now learnt to appreciate there is another side to LA. And I love it. 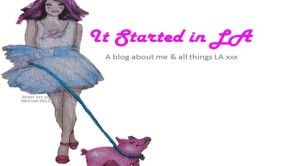 2. You live in LA! Tell us all about it – the best bits and worst bits!

I know! It’s like a dream come true (even though technically it wasn’t my dream). I love driving around, going to restaurants, shopping and hanging out and what seems to be a 24-hour movie/TV set. It took me ages to see paparazzi and anyone famous but now I do quite often. I still get a buzz about sitting in a restaurant and looking over to see Joan Collins and Bette Midler for example (two separate incidents but both real-life events). Because my kids go to a private school with famous actors I also get a buzz out of sitting in a parent/teacher briefing with highly recognisable A-listers!

The only bad bit about LA living would have to be the threat of earthquakes—especially “the big one”. Two weeks ago LA had its first “big” earthquake for many years. One jolt is fine but when this one didn’t stop it completed freaked me out and scared the crap out of me (can you say crap???). It was only about 10-20 seconds but because the epicentre was so close it was enough to lose a couple of framed-pics off my bookshelf and a (small) vase from my mantelpiece. We didn’t even think about earthquakes when we decided to accept the offer to move here.

Paps waiting outside my favourite celeb-filled restaurant (I keep the venue a secret because it’s managed to stay off the places to go to celeb-spot list and we intend to keep it that way!)

3. What things really highlight the differences between the Aussie and the USA cultures?

In terms of landing in America landing in California is as close as you are going to get to Australia. We’re both laid back and we share the outdoors/beach culture. The main difference I find (day-to-day) is the lack of swearing and the lack of drinking culture. I miss both very much.

4. We Brits and you Aussies often bond over rugby and cricket and senses of humour. Do you feel an affinity with the British expats in the USA?

Absolutely. One of my friends I first met is English. There are actually many English people at our school too and we are immediately drawn to one another (primarily because we “get” each other). We have a famous English rockstar in our school and even though we come from two different worlds having (English) sport in common brings our two worlds together.

It’s sooo good to crack a joke and have someone get it—I’m pretty sure many Americans don’t get me! (Thankfully I’ve met a few that do get me and they love our sense of humour or I don’t think I’d survive).

6. What’s your favourite Aussie saying that you keep uttering? And which Americanisms have you adopted?

“Cheers”! It means so many things but Americans often laugh when I say it. It’s second nature to me so I don’t even think about it.

I notice I’ve been using the word “switch” more often (noticeably so). We’d usually say “swap”. I don’t know why I chose to use the “American” word. I usually try to make a point of using the Australian world—mainly to get a rise—like thongs instead of flip-flops. Works every time.

7. Tell me a bit about your work and what you do.

I’m a full-time mum (mom) and was very bored. I did the very LA thing and had a few projects I was working on. I quickly realised that none of those projects would get off the ground until I had a track record so I set up my blog— It Started in LA. This keeps me sane, helps me talk about the many stories I have to share and gives me a reason to go out that’s not shopping and spending money. I’m loving it.

8. Tell me 3-5 things you would take back to the Australia from the USA.

1. Valet Parking — once you have it it’s hard to go back
2. Speed limit — there’s a speed limit here but there’s also a law that says you must travel with the traffic so if everyone is driving at 85mph (nearly 140km/hr) then you can!
3. Help — gardeners, housekeepers and people to put your Christmas lights up are freely available here and are relatively inexpensive. It’s cheaper to be on the dole at home then to work so people just don’t. That said I priced a housekeeper and I think to get one in Beverly Hills is more expensive than other areas.
4. Lower sales tax on luxury cars — it would be nice to go home to car prices being the same as they are here.
5. Fireplaces and fire pits — in our locality in Sydney unless they are historic indoor fireplaces are not allowed to be built into new houses. Such a shame.

Fab shop on Melrose Avenue. I want to go shopping!!

9. And 3-5 things you think the USA should have/implement from Oz.

1. The school system — I love our attitude to producing all-rounded children by providing academic, spiritual (in whatever form that takes) and sporting opportunities. Here it feels heavily skewed to the academic and getting into College and I fear my kids are missing out on the “fun” part of school.
2. Gun policy — I’m sorry (and I really don’t want to offend my host country) but I just don’t get the right to bear arms. Statistics show the right to bear arms increases the death rate. End of story.
3. Healthcare — it’s so expensive here and a little out of control. It’s hard for me to have a real opinion on this though because I’m still trying to understand it.
4. More Asian-inspired restaurants — we’re so lucky in Australia to be so close to Asia so have a huge Asian influence in our food. That’s not to mention we have so many excellent Indian, Malaysian, Vietnamese, Thai, Japanese and Chinese food. I miss Malaysian food the most because it’s the hardest to get here in Beverly Hills/West Hollywood/Hollywood even though it’s the mecca of amazing restaurants.
5. Attitude to drinking (and swearing) — I’m not quite sure why Americans are so scared to drink too much (or swear). For me any social occasion warrants a wine/cocktail/Champagne/beer … get the picture?
6. Parks. Not for purpose, just because. When the kids were home for too long going stir crazy I’d send them down to the local park. They could kick a footy or just muck around. There’s nowhere around here they can just go to just to muck around.

10. P.S.
I did not want to move to America. It’s probably the one place in the world (bar none) I didn’t want to live. I’m happy here and feel that living here has made me appreciate Americans now that I know them better. They’re lovely, well-meaning and friendly people with a good heart. I think we get the wrong impression of them through the news (shootings and suing people basically) when it’s really not like that. Now if I can just get them drinking and swearing …

Thanks Gwen, I loved it! And I’m looking forward to swearing and drinking with you in LA in the summer (and maybe hitting one of those celeb restaurants…?! 😉 ).