Posted on March 17, 2014 by ukdesperatehousewifeusa

I am over winter.

Thank you Uncle Sam, you can keep your snowy East Coast winters.

Meet the ‘BritChick’ (great name!), aka Bex Saunders. She is a very British girl, living in Canada. I like to speak to Brits in Canada to find out what it’s like in comparison to the USA. The two countries are so close and yet I feel they are so at odds with each other at times.

After 30 odd years living in the same town within a 4 mile radius, Bex, her husband and her two kids, India and Jude, upped sticks and moved 4000 miles to Nova Scotia! After a successful career in banking she now runs BritChick Social Media. She is a lover of all things British and social! I like her already! 🙂

Bex is the same age as me (a blossoming 24, of course!) and arrived in Nova Scotia in 2007. She says: ‘The reason we emigrated was we wanted a better place to bring up our kids and to open up their world to bigger opportunities. They are both doing their entire education in French now, so will graduate as bi-lingual and have dual citizenship. Pretty neat I think!”

Yes, very cool indeed, and the reason why many people choose to be expats. The world is full of opportunity!

1. When you arrived as an expat, what were your initial impressions of Canada? Has it changed much since you’ve been here?
My first impressions were a little bit scary. At first it felt like stepping back in time compared to the UK. And everyone and everything was so laid back. It took a while to get used to the slower pace of life but now it’s just the norm and we love it!

At the stunning Peggy’s Cove on a beautiful spring day.

2. What kind of fun do you have in Canada?
Absolutely tons of ways to have fun here in Nova Scotia. Winter time there’s skiing, ice skating on the many lakes, snow shoeing down the Trans-Canadian trail, snow ball fights, our hot tub!! Oh, and the polar bear dip! Yes I did jump in the ocean on Boxing Day and it was minus 25C. Best ever hangover cure. Trust me.

Summer time, we have a pool (bit bigger than the blow up paddling pool we had in the UK!). There are loads of lakes to swim in, or we swim in the ocean. The beaches here are GORGEOUS! We can drive to so many cool places, last year we drove to Boston and New York, next time maybe Montreal. It’s opened up a whole new world!

I should also mention that there are more bars downtown than you could shake a stick at!! So that’s pretty fun! Especially in the summer with all the patios and down on the boardwalk. 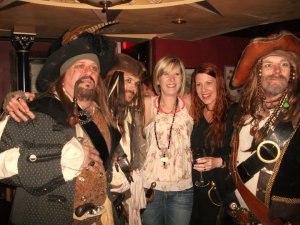 Bex and friend with some pirates in Durty Nellies Irish bar downtown.

3. What things really highlight the differences between our cultures?
To be honest the main thing is the language. It’s probably what gets talked about most when we are with our Canadian friends. There’s a ton of words that are different. Some I should definitely be careful how I use (ha, ha!). I once asked if I could borrow a rubber…yeah not the same thing here!! That and the food. I find the Canadian diet is very different. You couldn’t find lamb when we first moved here. It was a tragedy!

4. How is your life different from at home? What are the challenges and frustrations you encounter?
It’s so much more relaxed here. The work life balance thing is much better and no-one expects everything yesterday like they did in the UK. It was a challenge at first, but once you learn to go with the flow it’s all good. The biggest frustration is living out-of-town a bit, the city is a 30 minute drive. In England you could just call a cab and be in town for a night out dead easy. It’s different here I guess as everything is much more spread out. The house is huge compared to our old one and it’s sat on a massive piece of land covered in trees. One thing Canada isn’t short of is space and trees!

5. Do you actively seek out a British community?
I don’t really actively seek them out but I’m connected to a lot of Brits through Facebook and Twitter I guess. It’s nice to be in contact with them and I love to help newcomers settle. Where I live there aren’t that many locally but there are quite a few in Nova Scotia. I suppose you’re drawn to them, but I love being integrated with the Canadians and most of our friends here are Canadian. It’s great to be experiencing life the Canadian way even though I’m still very British. My little boy has been here since he was 3 so really he’s all Canadian now!

You know I’m British by my red Mini Cooper which has a Union Jack roof and wing mirrors! I love it! He’s my baby. 🙂

6. Have you made many Canadian friends, and, if so, how did those relationships develop and do you notice many differences between you?
I have lots of Canadian friends, yes. It started through school with some, and my neighbours for example, I just went and knocked on their doors to introduce myself. When I got here I literally didn’t know a soul so it seemed like the most obvious thing to do. The Nova Scotians are such warm and friendly people, it really didn’t take long at all to become great friends. They have done so much to help us in many ways. They would go out of their way to help us settle.

I then made more friends through work once I set up my business.

I suppose the only difference is that I’m so very British and they’re so very Canadian. Other than that, friendship is friendship. It’s funny to think sometimes that we don’t have a long history but that’s true of new friends wherever you are in the world.

7. What’s your favourite British saying that you keep uttering? And which Canadian phrases have you adopted?
Hahaha! There are so many but here’s a few:
Gordon Bennett; bloody hell (a lot); would you Adam and Eve it; are you having a giraffe/laugh?; bloody Nora; chuffing, flipping heck, BRILLIANT!……there’s a lot more!

I finally say liquor store instead of off license and cell instead of mobile because people didn’t have a clue what I was talking about! But when I go home and say those things I get ribbed senseless! It will however always be a boot and a bonnet, Home Depot not ‘deeeepot’ and herb not ‘erb!

8. Tell me a bit about your work and what you do.
BritChick Social Media is a social media management and coaching company. I basically either run people’s Facebook, LinkedIn, Twitter and Pinterest profiles for them, posting and working them, or I teach them how to do it effectively themselves. I do one on one coaching or I do workshops. I love educating people on the power of social media and how to get the best out of it. I can work with anyone, anywhere in the world. It’s brilliant! Last week I was coaching a chap on Google hangouts in Prague!

9. Tell me 3-5 things you would take back to the UK from the Canada.
– Absobloodylutely the weather! We have four fabulous seasons, all very beautiful in different ways but all distinct. Canadians get so much out of each season. I am, however, ready for this winter to end now! Bring on the spring.
– The large houses
– The laid back fun-loving attitude
– BBQ’ing all year round, even knee-deep in snow!
– The space
– Table service in pubs because I can’t believe I have to go to the bar for a beer when I go home! (Lazy BritChick)

10. And 3-5 things you think Canada should have/implement from the UK.
– More ‘local’ boozers, preferably British ones haha
– Proper sausages
– A local butcher
– All UK TV (I miss that soooooo much).

From a Desperate Housewife to a BritChick – thank you!