Posted on March 17, 2014 by ukdesperatehousewifeusa

There is a lot of love for the Irish in Baltimore (and across the USA), in fact so much so that it got me to thinking that with all the ‘Irish’ folk celebrating yesterday, today and officially tomorrow, I think the USA could quite easily qualify for an entry in the Eurovision Song Contest.

Anyway, the sea of green shamrocks and leprechaun hats swarmed the streets of Charm City and we ran a super fun St Paddy’s Day race. Just before the effing snow came again. Sigh.

I do NOT want to see anyone’s pictures of snow-covered decks this time round. I’m begging ya! Enough is enough! (Especially when I know that Spring has sprung and it’s glorious in Blighty!)

I met up with some charming Brits and some Americans, who are married to Brits, at the weekend. They had come over to Columbia for a meal and we talked about the usual things – what makes us laugh, what annoys us, language differences, things we say that confuse Americans, things our American friends say, where we live, the weather, the quirks, the culture, and all that expat jazz!

During this event I learned a very important thing about Brits. They like their chips (as in ‘fish and chips’) very hot. Not warm, and definitely not cold, but very, very hot.

One such gentleman requested that his chips be ‘hot’ to the waitress. He was very specific. This is what happened when they arrived….

They came back heated up, but sadly they were still not hot enough. 😦 / 😉

Also, fyi, the fish must not be frozen, but I think it probably was! 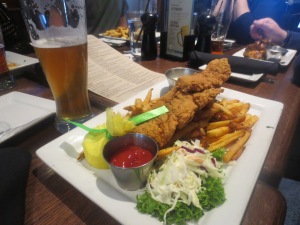 In addition, wherever they are, British men are always going to wonder what the football score is, and lo, one of the many TV screens in the bar we were meeting was showing the footie. Hoorah for them! 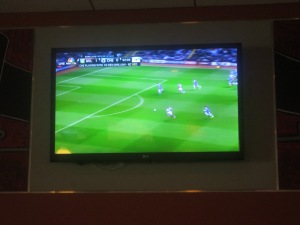 Most of these Brits were forever expats, and at my 18 month mark I am still a ‘newbie’, but then again I’m not a forever expat, so I’m also on the ‘home straight’. It’s a weird feeling. I honestly don’t know whether I am coming or going sometimes.