Posted on March 2, 2014 by ukdesperatehousewifeusa 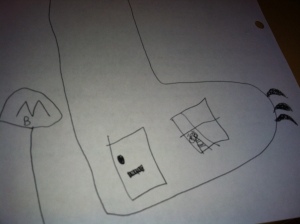 Harry’s homework was to draw a picture of the ‘Old Woman Who Lived in a Shoe’.

Being the creative type he is, he actually drew the ‘Old Woman Who Lived in a Tiger Foot’. He drew her at the window and then he drew the door and promptly put in a letterbox, which is what we have in the UK.

‘Ooh, a British letterbox!’ I cried, delighted that he remembered them.

And then he paused and said: ‘I’ll give her an American mailbox too.’

Which is what that thing is with the initials ‘MB’ outside the tiger foot.

What is interesting to me is that he is merging the two worlds in which he lived and lives in his creative drawings. And I like that. Long may that continue in his British/American head 🙂 .

I love this title (cos most of us are pretty gobby!) and I thought I should share some of the musings of Sharon, the British lady who write the blog. Our thoughts on things are very similar, as is our British sense of humour, so this really resonated with me. I’ve a feeling Sharon and I might just meet up when I hit the West Coast this year! (I also LOVE that she said the phrase mentioned in no.10 – excellent work! I shall attempt this also in American company to gauge the reaction!!)

In addition, it made me realise that, even after 20 years living in the States, sometimes you just are who you are, and Sharon is definitely a Brit!

The Gobby Brit
I’m a 20 year expat from England, currently living in Southern California where I work and play (well, work mainly). Both my children were young when we emigrated and are now fully fledged bilingual “Yanks”. Cultural and language differences were hard to overcome; we truly are two nations divided by a common language. Your average American does not fully understand English sarcasm and hence, I have been called opinionated, rude and harsh – which I believe is American for a ‘gobby cow’!

Having bored all my new friends with said opinions, my blog is a means of expressing myself in a funny, candid and sometimes snarky way. Hope you enjoy.

A Language Divided
There is nothing so annoying than emigrating to a new country which speaks the same language as you, to find that actually, they don’t speak anything like you – at all. Having lived in the USA for 20 years now, I still occasionally have problems. Here’s a few of my disastrous language faux pas, a couple of pet peeves and observations:

10. English Come Back’s Don’t Work
I had not been dating my American boyfriend for very long when he took me to a motorcycle event. Obviously there were big bad bikers everywhere and one young gentleman standing next to me was trying to light a cigarette and called out “Does anyone have a match? – without missing a beat I came back with “Your face, my arse,” – as you do – *silence* .. nobody said anything, you could hear a pin drop. I think I could hear my heart beating for a while, sure it would stop any minute. Oopsie… I was told, in no uncertain terms, that was rude and I probably shouldn’t do it again. And I can assure you, I haven’t.

9. Katsup is Ketchup
I spent one fruitless afternoon wandering around Stater Brothers Supermarket looking for recipe ingredients, which included katsup, which I couldn’t find anywhere. I finally gave up and asked a little old lady where it was. She took me by the hand and walked me around to the aisle with the condiments, saying “Here it is honey”… “Oh no,” says I, “I’m looking for Katsup, this is tomato sauce.” Apparently it’s the same thing – exit stage right, with red face.

8. I Can’t Order Water
“Could I have a glass of water please?” “Excuse me?”, “A glass of water?” … I have discovered I should ask for “WAAA-DURRR”. Works every time!

7. Tea Comes with Lemon
Order a cup of tea anywhere and you must ask for ‘hot tea,’ or you will get iced tea. Invariably you will get one weak teabag and a slice of lemon. Some places even give you a cup of hot water and a pot of hot water, but still with that single teeny teabag. Try as I might, I cannot get a good cuppa. Ask for milk and you get ‘that look’.

Sharon – I’ve grown rather partial to this now! 😉

5. American Women Want an English Accent
I don’t know how many times I have been parroted by an American lady who thinks she can speak the Queen’s English as well as me. It’s frightfully annoying!

4. English Pubs are Not English Pubs
It doesn’t matter how hard they try, you just can’t get a good old English Pub. Generally the definition “English Pub” means a lot of fake wooden beams, dodgy suits of armour and quite possibly an old red telephone box out the front (where do they get them from?) Televisions are everywhere and the food menu always includes a weird version of Shepherd’s Pie. Oh Ye Olde English Pub how I miss thee. 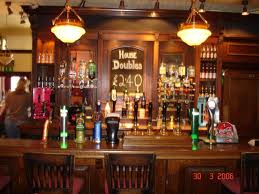 3. Aluminium is Not a Word
I’m not sure I can even say it properly anymore without getting tongue-tied. (*sad face*)

2. American Football is Not Football
This is a topic for a whole new blog post wherein I may suggest it’s a version of rugby.

AND… my number ONE peeve
Why, oh why, do I have to have turkey four weeks before Christmas?? It’s bound to ruin my perfectly English Christmas dinner – roast potatoes, Brussels sprouts, Yorkshire pud and all the trimmings. But when you’ve had turkey only four weeks before it takes a bit of a shine off the enjoyment. Thanksgiving dinner should be something different – maybe ham, which most Americans seem to eat at Christmas – umm, perhaps it’s because you had turkey in November??

Yes, it is a first world problem, but I’m not called a gobby cow for nothing!