Posted on February 23, 2014 by ukdesperatehousewifeusa

So, Harry had to write down the book he likes to read most of all in the ‘class book’ to share with his friends as part of his homework on Friday. Simple, right?

Not when the sentence includes the word ‘favourite’ and when he’s asking his British ma how to spell that word, she spells it with a ‘u’.

When we looked at the final sentence, I guessed he might get a spelling correction from his teacher when this book is returned to school on Monday.

Don’t be misled by this statement – it’s actually a very crap book!

But what to do about that? Favorite/favourite. When Harry returns to school in the UK he will be spelling it with a ‘u’ and I kind of figure that in Kindergarten there is some room for leniency on spelling 😉 . I await the red pen response!

The Daisy Dukes are out!

The Daisy Dukes got their first outing of 2014 today. It was bloody lovely and warm! And yet there was still snow on the ground! Time for some Daisy Dukes action shots in the snow! 😉

Daisy Dukes and flip flops in February in the snow!

Happy to see some sun at last 🙂

Evening in the Stacks: Vintage Vegas

Last night I hung out with some of the truly top folk I have met during my USA journey in Howard County. We were at the Miller Branch Library in Ellicott City raising funds for library and education initiatives. It was voted the Number One Library System of 2013, and it really is pretty amazeballs.

So, I was there pouring drinkie-poos for an hour with my fellow ‘celebrity bartenders’ to try and raise more money, and we did a pretty good job of it. Mickey Gomez won for the third year running! Brillopads! Ian Kennedy and I worked as a team (pretty much because I couldn’t work out how the bloody hell to work the bottle opener – thanks Ian! 😉 )

And there was a whole lot of group hugging from the folks of Howard County, especially by the Martini bar. I don’t know if this is special or particular to Howard County, but these events are a blast and brilliantly put together, and I have a little tick in my head that says we should do more things like this in the UK – or rather, I would be keen to organise something like this where I live in the UK at some point…..

Anyhow, back to event! Everyone was on top banana form.

‘Let’s do a selfie and tweet it!’ says Courtney Watson! Cool! (I mentioned before how Courtney has one of THOSE smiles – how could I refuse?!)

Courtney Watson and Jessie Newburn and me (trying to figure out the flash!)

‘I wanna be in your blog! Get a photo!’ some people requested. Well, here’s the evidence of last night’s fun for a good cause.

And yes, to confirm, I am dressed as a showgirl (it was Vintage Vegas themed!!), and yes, I did fall over in the library at the end of the night. Because I am a very classy Brit 😉 .

Bar tending with Ian Kennedy and his excellent beard

Being interviewed for Comcast 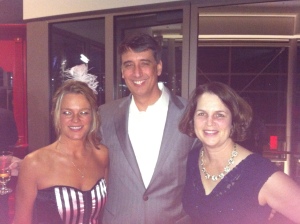 Me and Wendy Jane Royalty, don’t ya know!

Bill Woodcock aka The Marshmallow Man

First time I’d chatted with Allan Kittleman – and a jolly nice chap he is too!

My USA bestie, Nicole, and I hang with Dylan Goldberg, who will probably be President of the USA in 10 years’ time 🙂

Tom Coale was effervescent and charming all night long 🙂

What a weekend! Thanks America, this little Brit had super fun! 🙂