Posted on February 15, 2014 by ukdesperatehousewifeusa

Apparently, I don’t say Taco correctly, like the Americans do, according to Harry. And he might very well be right.

‘Would you like a taco?’ (I pronounce it TACK-O)
‘A what? It’s not TACK-O. Americans say TAH-KO. But it’s not even an English or American word anyway, so you have to say it right.’

I don’t think ever, ever, ever in the UK I’ve been asked it I want to take home my food that I can’t eat from a restaurant in a take out box. Maybe, just maybe pizza, but otherwise, nope, I don’t recall that EVER happening.

Maybe it’s something to do with portion size here in the USA that I tend to have more leftovers, but that’s another debate. 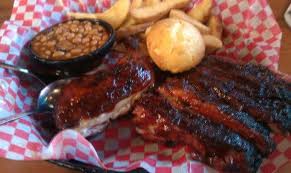 If you can’t eat all that, fret not – shove it in a box and take it home!

It’s actually no bad thing to take it home and not waste the food on your plate, and I was so excited 18 months ago when I was given my first take out box at Famous Dave’s. I stuffed in the ribs and the cornbread and we merrily munched on that as another meal the next day. But, I honestly don’t think I would be offered a take out box anywhere in the UK if I couldn’t finish my meal.

If this is now the case, and it does happen, yet again I will stand corrected.

It’s funny, it’s just one of those American things that I now take for granted. I’m not sure how a British waiter or waitress would respond if I asked for a take out box. I’ll try it next time. Not in Claridges, though, naturally.

This is my British friend’s car number plate / license plate in the USA. She drinks tea, in case you didn’t guess. 😉