Posted on February 12, 2014 by ukdesperatehousewifeusa

What happens when a bunch of British women in the USA get together…..?

I met up with a group of British ladies this week, all of whom have been in the USA for varying amounts of time – some for 40 years, some for one year, some who had lived all over the States, and some who came out to Maryland with husbands and families for postings and just stayed.

Let me tell you something: I think that if I had walked into that house NOT knowing that this was a group of British women I would have just automatically known that they were.

Why? Because of the tea, the teeth and the pearls…. 😉 I said to one woman that we could probably cast The Calendar Girls three times over from this bunch of women. Eclectic, eccentric and most excellent!

One of those Calendar Girls in my mother! 😉

And what do we talk about? Oh, the differences between us Brits and our American friends; how our accents don’t change; what we love about America (and what we struggle with!); how the kids adopt the American accent to fit in (apart from Harry!); where we’ve been; what we appreciate and miss about the UK; and the weather at home and here, of course!

The Queen on the teacups gives it away!

A very British selection of cheese and biscuits

Millionaire’s Shortbread: is this a very British treat? 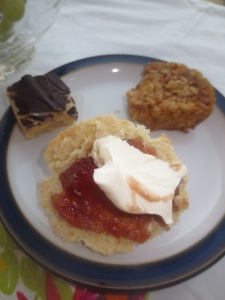 I am always surprised by the number of Brits there are in the USA. These British women loved living in America, but were fiercely proud of their culture and their roots and craved some very British things still, even after all this time.

One Brit to another, looking at the two teapots on the sideboard: ‘Is one decaf?’
Hosting Brit: ‘No, they’re both just tea.’

When I left the gathering I said something very British that I haven’t said in a long time.

‘Cheerio!’ I said – and I smiled, acknowledging my very British British-ism.

What do you think the phrase ‘quintessentially British’ means?

For some it might be a Sunday afternoon walk, a roast dinner, Bonfire Night or queuing! According to sources ‘the culture of the UK is the pattern of human activity and symbolism associated with the country and its people.’

But what does ‘quintessentially British’ mean to you?

What does it mean for you?

I’m writing a new piece entitled ‘Quintessentially British’ for Smitten by Britain and your thoughts on this would be a fantastic addition. Leave your comments here, on my Facebook site, or email me at clairebolden@hotmail.com

I’ll also be writing a companion piece entitled ‘Typically American’, so any comments on that also welcome!