Posted on February 10, 2014 by ukdesperatehousewifeusa

USA basketball is messing with my head!

So, yesterday I encountered American basketball for the first time (Washington Wizards vs the Sacramento Kings). I’d seen the Harlem Globtrotters before (see here for a reminder of THAT experience!), but this was my first real ‘game’.

I went with an open mind, and hoped it would be fun and all that jazz. It was much more than jazz – it was like some messed up, crazy bad acid trip messing with my head.

Honestly, my senses felt they were being constantly attacked aurally and visually and it was utterly exhausting. Oh yes, and were they playing basketball at all….?!

Look, I think basketball is a fab sport – it has shades of netball, which we Brit school gals were raised on (although I still reckon that netball is faster, more skilled, a better team sport and we surely don’t ‘fall’ over as much). Credit where credit is due – these basketball guys are amazing athletes, with skill and expertise – and some of them are pretty hot too.

BUT, for me, the whole spectacle of the basketball court takes away from the actual game. 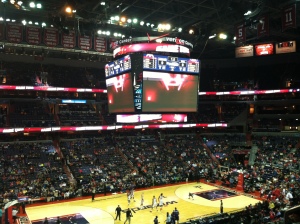 So, what exactly was messing with my head?

1. There was never a moment’s silence on court where you could just hear the cheers of the crowd. There was constant noise – music, or talking, or videos, or commercials, or thanking of someone or other, or video cams (admittedly, I liked the dance cam, but had to ensure young Harry kept his kit on for that bit).
2. It was all the jumping from one song to another (never a whole song); the whole ‘defence’ tune (which I had nightmares about last night) that did my head in. How on earth can anyone concentrate on anything? There is no time to just ‘enjoy’ the game, or even the song.
3. I didn’t know where to look half the time – am I watching the game, or am I watching the screen showing the game, or am I watching the cheerleaders, or am I watching the managers and coaches hamming it up on the sidelines, or am I watching the people dressed up as bears and eagles? See – messing with my head, it was!
4. The ‘organ music’ reminded me of the organist in the Vicar of Dibley where he liked to play popular music in a kind of camp way, which was a little bit embarrassing and inappropriate. It was pretty funny to hear it, and at least chortling about that sort of got me through that bit of it.
5. At one point I thought I was in a bad dream being surrounded by food the whole time. Non-stop food. Commercials for Papa John’s half price pizza if the Wizards get 100 points; this side of the stadium gets 99 cents iced coffee at Dunkin Donuts if the guys gets all the cubes in a box (mid-game entertainment); buy your over-priced fried food here; get your nachos covered in heart-attack there; get your cotton candy and keep your kids awake all night over there. Argh! It was literally non-effing stop with the food. One guy next to me had nachos, then a hot dog, then a massive soda and then apple pie and then back for a pulled pork sandwich and pretzel. STOP EATING!
6. The cheerleaders (‘dancing girls’) did not do tumbling and jumping and all that exciting stuff. Gutted. They just kind of posed and shook their pom-poms and waved their booties in the air (tho, to be fair, I am going to steal a move for Zumba). I don’t think they got the irony of their routine to ‘Respect’…..
7. You can’t hold a conversation with the person closest to you at any time – it’s just too frigging loud! Just when you think you might be able to say something to the person next to you, some dude comes on and is shouting on the screen via a mic telling you what to scream when. Not a moment’s peace is given to you in three hours. I confess to putting my hands over my ears at one point and rocking back and forth….. 😉 I had to get up and walk outside for a few minutes in the snow – yes, it was that bad a trip! 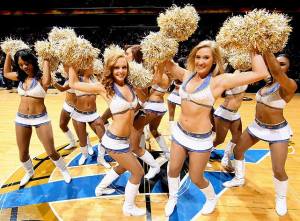 What did I like? Really…hang on, I’m thinking…..I liked the fact that I have experienced this now, and that I know this bit of America is not for me. It was too in my face, too bright, too loud, too commercial, too hectic. I think I need to take myself off in the mountains and find a Dude Ranch to chill out at and feel at one with nature, working hard waxing saddles (or whatever it is you do), picking my own crops and eating outdoors in the clean air to cleanse myself from last night’s experience.

It made me wonder what the complete antithesis of this basketball experience was in the UK, and it is totally Wimbledon. Totally. I think I’m a Wimbledon kind of gal at heart. 😉 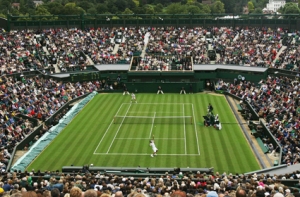 I’ve been here and it is beautifully, serenely British 😉

Now, I did enjoy the baseball experience of last year and I’m looking forward to a few games seeing the Orioles this year. Why did I enjoy that? Because it was outdoors, because I got to watch a game (okay, it was slow-ish, but they played), because there was entertainment, but it was a bit more contained, and less in your face. So, I’m good to go with baseball – roll on the baseball season!

I got a note from school today declaring that tomorrow is the 100th day of school.

Um – I want to say ‘liar, liar, pants on fire’ because I don’t think that’s entirely true, what with the number of frigging snow days we’ve had! 😉