Posted on January 24, 2014 by ukdesperatehousewifeusa

The kids round these parts (Maryland that is, of course) support one of two teams generally – The Baltimore Ravens or The Washington Redksins. My son, age 6, knows not a lot about American football, but such is the way of the Kindergarten classroom that the American lads in there talk mainly of football, what with the Superbowl looming and all that important eating – sorry, I mean football.

Anyhow, Harry wanted to see the teams that were available to support and after a while procrastinating over this important, life changing decision he has decided he will start to whoop and cheer and raise a large foam finger for The Pittsburgh Steelers. His reasoning?

1. ‘No one at school supports them and somebody has to, otherwise they will be left out, so I think it should be me’; and
2. ‘I like the green (I think it’s black?!) and yellow’.

I’m going to have to start paying attention to American football!

So, Pittsburgh Steelers it is. He declared, like all good sports fans, that he needed a top to show his support, and he chose a #43 jersey (listen to me using the lingo!) for Troy Polamalu – he pretty much liked the name of the dude.

And what a dude! 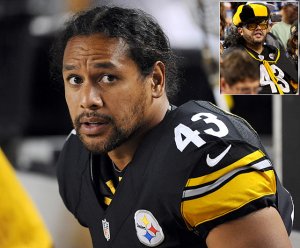 Troy Polamalu – I think I might be supporting him too 😉

Troy gets the piss taken out of him all the time for his wild hair…..but that won’t bother Harry. 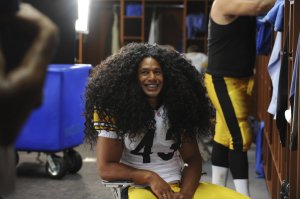 I’ve recently stumbled across The Septic’s Companion, which is a site that provides translations of British words, in a somewhat irreverent fashion. It’s fun, especially for Americans who like a good old bit of bloody British swearing (I have one friend who, whever I see her, asks me to say ‘bugger’ in my best British accent – she loves it!)

There are even audio versions so you can really hear how we say ‘bollocks’! ‘Gubbins’, ‘easy-peasy’, and ‘piss-artist’ are all there in too!

‘Gubbins’! What a great word that I must use much more often when I write and talk and all that gubbins – see, I used it – hooray!