Posted on January 23, 2014 by ukdesperatehousewifeusa

Hot totty of Maryland, the one and only Governor Martin O’Malley, is giving his last ‘State of the State’ address today.

I’m guessing he’ll mention Baltimore a lot. He perhaps won’t mention how The Wire’s Mayor Carcetti is based on him, and maybe he won’t talk about how much I love his arms and how I wish that I could go and rock out with him in some bar sometime as he plays on his guitar. Nevermind, it’s not to be 😉

Just one chance to see you rock out in a bar, that’s all I ask 😉

Sometimes I forget I am in America

Sometimes I do, I forget I am in America and I’m just living life and then – BAM! I see something that reminds me.

Like an old dude in a baseball cap driving a 1980s clapped-out Chevy. You’d never get that in the UK. Fabulous!

British food in the USA

Occasionally I’ve asked my hubby or visitors coming from the UK to bring me stuff. Dairy Milk sometimes, but usually it’s Dove Invisible Dry Deodorant (honestly – you cannot get it here in the USA – in fact, the whole deodorant thing deserves a blog of its own, because for a country that is so advanced, it’s choice of deodorants is CRAP 😉 )

Anyway, back to food. I did buy some Branston Pickle off the British shelf in the store the other day, only because we were having some American friends round and I thought it might be a jolly British thing to have on the table when the cheese and biscuits came out, but to honest, most people went for the homemade blueberry jelly and the spiced apple chutney, so sorry Mr Branston, your pickle’s being passed over for some fancier condiments. 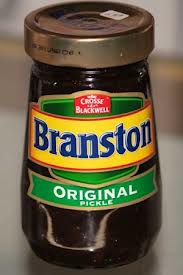 For an article I was writing I asked a bunch of Brits in the USA which foods from the motherland they missed the most whilst over here. Believe me, this topic of conversation can get some British eyes welling up as they talk of long-lost loves like Pickled Onion Monster Munch and McVities Digestives….but what are the top things that they really miss?

Read my article for the wonderful Smitten by Britain website here – enjoy (with a custard cream, if you can get your hands on one!)