Posted on January 14, 2014 by ukdesperatehousewifeusa

With the recent Downton Abbey frenzy, everyone in America-land is going ga-ga for some proper tea. (Well, not everyone, but you get the gist.)

I’m going to be honest – I don’t really drink what one might call ‘proper British tea’ out of a tea-pot and wotnot. I keep the teapot (wedding gift, of course) for special occasions. I generally dunk in my green tea bag and let it stew and that’s me done. None of this ‘builders’ tea’…. oooh, I’m pretty much guessing that’s not a phrase used in the USA much! 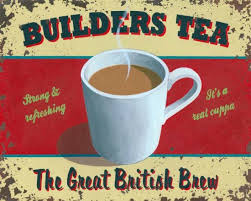 Hot and strong, just like my men (fnar, fnar)

‘Builders tea’ is generally strong tea with a dash of milk. It is described as ‘an English colloquial term for the sort of strong, inexpensive tea drunk by construction workers taking a break. The term is used to differentiate from other servings of tea, as it is usually both brewed strongly and served in a mug (as opposed to being brewed in a teapot) milky with two (or more in some cases) teaspoons of sugar. The term has widespread throughout both Ireland and the United Kingdom.’

I used to date a builder and I have made many cups of this tea – flasks, in fact. Many endless flasks of builders tea…

Anyway, the folk at the Columbia Patch have created a page so that you can ‘bring some Downton living to your home’. Gawd, I had better read this (even though I’m not even watching Downton…).

They say: ‘The biggest learning from all that Downton watching? Do tea right. Americans threw the most famous tea party of all time and yet we haven’t mastered the art of all things tea. We pay so much attention to coffee and buzzing through the week that we neglect the fine details that make drinking tea both a ritual and an excuse to slow down and relax.’

No just chucking in your tea bag, then. I’ve failed as a Brit 😦

They offer tips on how ‘what you need to know to make the perfect cup of tea and throw a classic tea party [so that] The Dowager Countess of Grantham would approve.’ 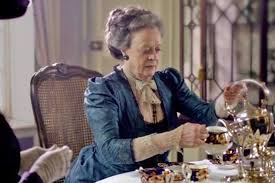 She knows how to make a proper cuppa char (that’s slang for tea!)

I don’t do any of this. I would like to confirm that if you are invited to my house in America-land, this will not happen. You will get offered green tea, green tea and mango, green tea and ginseng or Earl Grey (and I only have almond milk, so sorry about that!)

I’ve been very busy recently writing an article about the differing attitudes between Brits/European and Americans towards nudity. Yes, this is how I choose to spend my spare time.

Anyway, it’s been fascinating, as you can imagine!

And lo, I discovered that there is a nudist camp right here in Maryland – well I never did! in Maryland, I say!

They have been ‘Living Naturally Since 1934’ and the site is nestled on 98 acres of pristine woodlands which back up to the Patuxent River. Lovely! It actually looks idyllic. 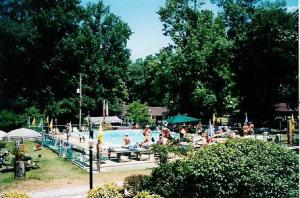 I bet you’re going to click on this one to make it bigger….

I was just a bit shocked because, and I don’t want to spoil my article for you, which will be published towards the end of this month, generally Americans aren’t as open about nudity as us Brits. I’ve registered and observed a few things that have made me acknowledge this….oh, you’ll just have to wait and read the article.

Anyhow, my favourite bit of the website is the constant reference to its ‘members’…..

‘We like it when daily members attend our events.’

‘Daily members can attend our events except for those that are marked “members only”.’

‘Every year each daily member must fill out a waiver form.’

‘A daily member is limited to three visits per season.’

Apparently, there’s been a ‘nude feud‘ going on there recently with a woman holed up in a cabin, refusing to come out – since the summer.

She was told this week she had to move out of the cabin, and she wanted to do it in the nude, but, she said: “it was a little bit cold.”