Posted on January 6, 2014 by ukdesperatehousewifeusa

Question: who has the ‘accent’? The Brits or the Americans? I don’t know and I don’t mind – I love accents, regardless. They are a cultural pleasure and they are part of our identity.

Though, according to some, not all British accents are ‘sexy’ 😉

Not all British Accents are Sexy! – watch more funny videos

BUT – I’ve heard some Brits say this statement (below) before, and to be honest, it makes me cringe, get embarrassed and, I feel, verges a little on the side of snobbery and superiority:

American person: ‘I love your accent!’
British person: ‘You’re the one with the accent, not me.’ 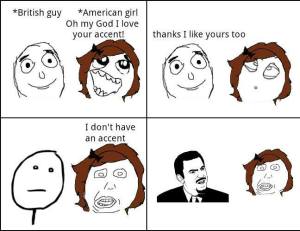 Anyway, I still think accents are wonderful things and I’m proud of my accent, and I love to hear others from all over the place. Slowly, but surely, I am beginning to distinguish between accents from all over the States. Whatever the politics or the history of the accent, it is ever-evolving and that is a wondrous thing, ain’t it?!

I was asked by a Brit if there is a USA equivalent for the following British words: ‘numpty’, ‘plonker’ and ‘pillock’. (FYI, these words are used to describe someone who has done something a bit daft, and aren’t overly rude or aggressive!) They’re what one might call ‘nice insults’ (or is that an oxymoron?!). I just don’t know if there is an American version of these words…. I heard one yesterday that might pass – ‘ding-dong’ 😉

Interestingly, Sir David Jason says an American remake of British TV show ‘Only Fools And Horses’ won’t work as there’s no word over there for ‘plonker’.

Oh flippin’ Nora! There is so much love in the USA for Downton Abbey, season 4, I can barely get on to my social media without some mention of it! People in Maryland were even dressing up for the first episode of the new season last night! 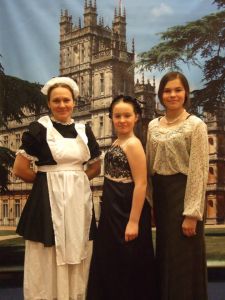 There is a whole lot of love for Downton Abbey, but I agree with my good friend Melissa, who runs Smitten by Britain that it’s pretty much got to be the last season, right? I didn’t watch the season 4 premiere last night because I haven’t even watched season 3 yet – I’ve been far too busy doing things in the USA, don’t ya know! 😉