Posted on December 19, 2013 by ukdesperatehousewifeusa

So I am merrily driving along in Howard County, Maryland in the land of America listening to some country music and admiring the scenery when I STOP.

A sign tells me that British celeb Frank Bruno, the boxer/panto star/tragic figure/him of the booming laugh has adopted a road right here in Howard County. Can I be seeing things straight?!

It can’t be Frank ‘You know what I mean Harry’ Bruno off the British telly! What’s he got to do with this area? I think it must be another Frank Bruno, but even my searching on Google does not give me a Frank Bruno connected with Howard County….. so who is this Frank Bruno who has adopted a road sign at Underwood Road, Sykeville, MD? I need to know!

Not this Frank Bruno, surely?!

I heard some Americans talking about the ‘traditional English parlour game Snapdragon’ today. I confess I know not of this game!

Apparently Snap-dragon (also known as Flap-dragon, Snapdragon, or Flapdragon) was a parlour game popular from about the 16th to 19th centuries. It was played during the winter, particularly on Christmas Eve. Brandy was heated and placed in a wide shallow bowl; raisins were placed in the brandy which was then set alight. Typically, lights were extinguished or dimmed to increase the eerie effect of the blue flames playing across the liquor. 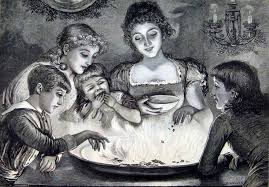 Darling, come and look, little Francis is on fire! 😉

I suspect it doesn’t get played as much these days owing to health and safety issues and the fact that you could potentially burn your entire hand/arm/face with hot brandy and flames spraying forth. I think I’ll stick to Twister 🙂 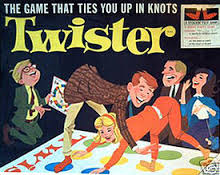 Even more fun when you’ve DRUNK the brandy 🙂

Happy Christmas to me from me!

Look what I’m drinking my afternoon cuppa in!

My very own cup of tea mug 🙂

Yes, that’s my Christmas present to me from me 🙂