Posted on December 4, 2013 by ukdesperatehousewifeusa

Elf on the Shelf

I’ve heard a few Americans talk about this Elf on the Shelf thing recently. Some good, some bad. 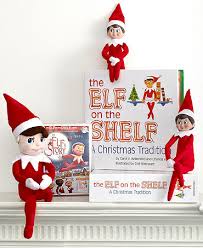 The Elf on the Shelf (of course)

It’s this little toy dude who sits on a shelf watching over you to make sure you are good for Santa for Christmas.

Or, as the marketing spiel goes……

‘The Elf on the Shelf® is a special scout elf sent from the North Pole to help Santa Claus manage his naughty and nice lists. When a family adopts an elf and gives it a name, the elf receives its Christmas magic and can fly to the North Pole each night to tell Santa Claus about all of the day’s adventures. Each morning, the elf returns to its family and perches in a different place to watch the fun. Children love to wake up and race around the house looking for their elf each morning.

There are two simple rules that every child knows when it comes to having an elf. First, an elf cannot be touched; Christmas magic is very fragile and if an elf is touched it may lose that magic and be unable to fly back to the North Pole. Second, an elf cannot speak or move while anyone in the house is awake! An elf’s job is to watch and listen.’ 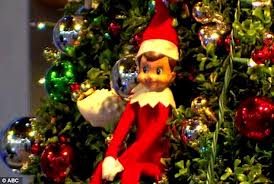 Christmas joy (for some)

However, some grown up Americans I have spoken or read about have cast their doubts about the Elf on the Shelf…..

1. The kids only remember to be good if they see the Elf and the rest of the time they are just kids and totally forget about it and behave as they want.

2. I am anti-Elf on the Shelf. I don’t want anyone to act well just because they think someone’s watching.

3. I am anti-Elf on the Shelf because I am lazy.

5. It used to really irritate me in one of those “What is this world coming to?” kind of ways, but now I’m just glad for people that they have hobbies.

7. I’m a firm believer that kids don’t need any outside influences to get excited about Christmas. I’m certain the thought of waking up to a few gifts is enough to make them giddy with excitement. The Elf is just a consumer-society-driven purchase that adults fell for.

Other folk, though, well they can’t get enough of that little fella!

1. Ours (his name is Flyer, actually) gets us excited for the holiday season. …he helps us with our count down. I do a fine job of monitoring my kids behavior.

3. We also use Jesus as a motivator for doing the right thing and I would doubt people would say that is wrong.

4. Jesus or Elf on the Shelf? Tough one, but I’ll take Jesus.

…….So this is just one of the many debates that, I am sure, exist about Elf on the Shelf. One day it will certainly appear in the UK, if it hasn’t already.

There are funny things that you can do with your Elf, if you so wish. Like these 🙂

How does he wipe…? 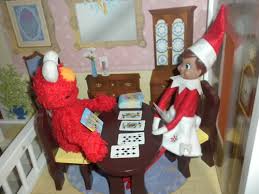 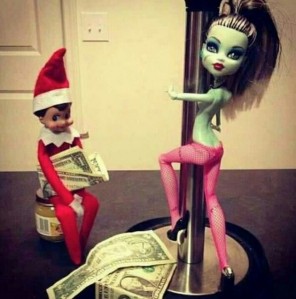 After seeing these images, I might just go and get me an Elf – it looks kind of fun! 😉 See more here!