Posted on November 25, 2013 by ukdesperatehousewifeusa

Thanksgiving in the UK

Yes, folks, it has happened. Apparently the UK is ‘doing’ Thanksgiving.
This is the report that came back to me direct from the UK yesterday.

I don’t get it! Thanksgiving is about American history; it’s not a known part of the British culture. Sure, we can say ‘thanks’ as Brits, and why not do it at a dinner (I like that bit), but in reality wouldn’t it be a bit like the Americans ‘doing’ Guy Fawkes Night? Sure, have a night of burning effigies and fireworks, but it’s not going to be about preventing the blowing up of the Houses of Parliament, is it now….? 😉

Anyway, I’m a little confused as to why the UK is celebrating Thanksgiving, when the idea of it is to celebrate the Plymouth colonists and Wampanoag Indians sharing an autumn harvest feast in the USA. And, as I now know – thanks to Kindergarten history – it wasn’t until 1863, in the midst of the Civil War, that President Abraham Lincoln proclaimed a national Thanksgiving Day to be held each November.

Sooooo, allegedly there are Thanksgiving Dinner menus being advertised in restaurants and Thanksgiving paraphernalia in the shops.

A piece to treasure

And these lovely window stickers… 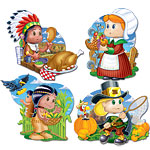 I suppose for the expat Americans in the UK it’s nice to be able to get your hands on some traditional Thanksgiving stuff or pop out and eat turkey and wot not as part of the celebrations.

But, Tesco, as ever, has catered for all your expat Thanksgiving needs in the UK. It is in no way about making money….

And, if you are in London and need to know where to eat for Thanksgiving, just check this guide out 🙂

So I gave an incorrect response to a colleague/co-worker today who asked me if we celebrate Thanksgiving in the UK.
“No, we don’t have it,” replied I, wishing to also follow-up with a history lesson, but resisting.
Forgive me, dear co-worker. I take it back, because apparently “Yes, we do.”

My other half has just returned from the UK and came back with three things:

1. UK Cadbury Dairy Milk
2. An acknowledgement about how small the UK roads are, and
3. A sigh and declaration that now he has returned to the USA it’s ‘back to mandatory tipping’ (followed by another sigh).