Posted on November 23, 2013 by ukdesperatehousewifeusa

Okay, so in the UK schools you have to press a buzzer to get in to the school and there are cameras and wot not and you have to sign in and it’s all very security conscious and, whilst it’s a little bit of a pain, and a shame that it has to be that way, ultimately it’s a good thing.

Well, this week apparently there were some PTA shenanigans going on at one school because some school folks want to put in a security system and some of the ‘moms’ are against it, and some are up for it, and oh my, it’s all Vera Bradley handbags at dawn in the playground. 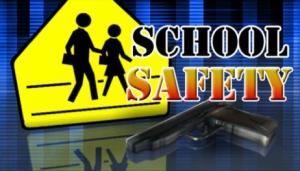 A blunt picture from the USA media

So, I’ll be honest…I’m a bit shocked that there isn’t more intensive security in the schools. In some of them, you can just wander on in, maybe take a visitor sticker if you fancy it, mooch about, have a nosey in the classrooms, watch the PE sessions, have a sit down in the cafeteria, pull out a gun….

Look, I’m just saying….. And after Sandy Hook, well, isn’t it just right to be a tad more vigilant. So what if it’s a bit of a pain in the arse to press a buzzer and have a security camera. Really. So what if it feels a little inconvenient when you’re dropping your kid off/coming in to help at the school.

There are some things which are far more inconvenient, and which can have much longer lasting effects….

I learn a lot of new, very useful and very important things when I hang out with my American mates.

‘What are these games?’ I enquire.
“Have you never heard of them or played them?’ they reply, aghast.
‘No…’ I reply, trying to recall drinking games we might have played in the UK. I can’t recall many. I think we just drank, because the important thing was to just get drunk.
‘What did you do for fun….?!’ my American chums chortled at me.
I couldn’t really remember….

I have been promised that I will be playing this soon 🙂

I will, of course, be avoiding the alcohol poisoning 😉

The other day I told an American friend that I ‘blagged a ticket’. I felt I owed him an explanation of what that meant: I got a free ticket to an event in a cheeky, harmless way.

But…it can also mean:
a) Trickery to obtain something vital or dear to someone, especially information.
(Urban Dictionary explanation: ‘The scumbags blagged themselves everything from televisions to trainers during the riots. One guy even looted some Immodium, after an earlier break-in at Nandos.’ (This last bit is funny 😉 )

b) Thieving, stealing.
(Urban Dictionary explanation: Stephanie blagged herself a free drink by flashing some healthy cleavage to the barman, shaking her arse as she walked away.)

Someone blagged themselves a free pass to something!

Clarksville, MD. Aka, The Bubble.

The area in which I live topped the zipcodes of the USA the other day and one resident spoke about living here in the Washington Post.

The thing that amused me about the article was this very true overview of the area:

‘….Clarksville, Md., [is] a bedroom community midway between Washington and Baltimore where the median household income tops $181,000, more than triple the national average.

‘An astonishing 98 percent of River Hill High School’s graduates head to college. Volvos, Mercedes-Benzes and BMWs are scattered throughout the student parking lot. Even pets get in on the refined tastes of their owners; in a small shopping center near the school, a shop specializing in organic dog food is next door to the organic grocery store.

‘Clarksville sits in one of the nation’s “Super Zips” — a term coined by American Enterprise Institute scholar and author Charles Murray to describe the country’s most prosperous, highly educated demographic clusters. On average, they have a median household income of $120,000, and 7 in 10 adults have college degrees.

‘Although these areas would be considered rare in much of the country, they’re fairly ordinary by Washington standards.’

Ordinary and very, very rich. Not everyone lives like this, obviously.

Now, Clarksville sits in Howard County, and a great county it is too, but a report in the Baltimore Sun read thus (and the numbers shocked me):

In Howard County, 4.6 percent of the population — or 30,800 people — live at or below federal poverty guidelines.

For a family of four, the federal government says their income must be $23,550 or less.

But $50,000 is required for a family for self-sufficiency [in Howard County]. That means an additional 43,000 people in the county need support.

“With the average county home costing $447,000 and a two-bedroom apartment renting for $19,500 a year, “it’s clearly not possible for these families to find affordable housing,” says Deepak Chadha, a volunteer with the Community Action Council of Howard County. “We have distributed 1,140 housing vouchers, but we have 5,200 families on a waiting list.”

Chadha said there are four “big pockets” of need in the eastern part of the county, in Columbia, Savage, Elkridge and Laurel, while the average annual income in western Howard is $181,000.

So, there you have it. Wealth and poverty, living side by side in America. A stark contrast that really makes you think.