Posted on November 17, 2013 by ukdesperatehousewifeusa

Today felt like a very British day in Maryland.

The air was damp, the skies were clouded over and it felt like, well, it felt like a Very British Sunday.

Plus, I spent the afternoon listening to and talking with a group of expat British women who have been in America for roughly 20-30 years. Two of them came over with their jobs and one arrived all alone at the age of 18 as an au pair – and all of them married American men and have stayed here ever since.

The accents have kind of stayed, though American inflections and sayings intersperse the Britishisms. But when British women get together, they are so….well, so British! You can take the girl out of Britain, but you cannot take out the puns, the way the conversation always ends up about boobs, the amusing crassness and the cheeky chatter. Fact.

You also cannot deny us our afternoon tea and biscuits! 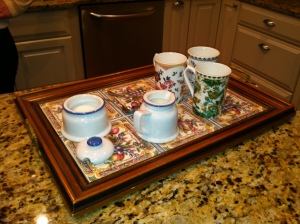 I love to listen to the stories of these ladies’ lives here; their anecdotes; what they miss; how they feel about still being ‘aliens’; and how it is to integrate into a community, but still feel British at heart.

1. Trapped between two worlds – this phrase intrigued me. These women have lived here for so long that their lives are firmly in America and its culture, but sometimes that is just how it feels – you are between two places: one where your life goes on with different opportunities and you become part of something, and the other that is part of your heritage and where your family lives and where their lives carry on.

2. What happens to the kids? The kids are American, yet British. If something happened to your partner out here, would you upsticks and move back to the UK? What impact would that have on the kids? We debated these scenarios today and it’s a heartfelt discussion, let me tell you. Everyone is grateful for their lives out here in the States. But what would make you get on a plane and go back ‘home’ permanently? And where is ‘home’….?

3. Brits are less uptight. Now, an American said this to me yesterday. She said that she thinks that Americans are generally a more uptight nation. Perhaps, about somethings. I think our topics of conversation today might have shocked or bemused some American friends….we Brits are (generally) more frank and open and naughty and rude. It’s just the way we are 😉

I came away feeling like I had had a very British day, and sometimes that is no bad thing in my fast-paced, very American world in America.