Posted on November 13, 2013 by ukdesperatehousewifeusa

So, this weekend I went to Atlanta to play netball. 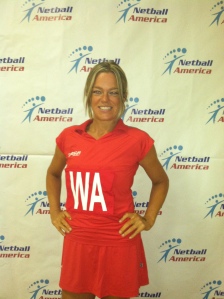 That’s me, that is

I hear this ALL the time in America when I mention netball: ‘What’s that?’

And I reply thus (with an exasperated sigh, usually): ‘It’s like basketball, but you can’t run with the ball, there is no backboard when you shoot and it’s mainly played by girls.’ But there is much more to it than that (and not just the very short skirts, chaps….)

This is my report on netball and an explanation of the very great game.

But wait! When I was waiting yesterday (in the flippin’ freezing cold – note: not smug anymore) for the school pick up my American friend said that she had been watching some kids playing Ultimate Basketball, which, she said ‘is very like netball’!!

And she’s right! There is hope for netball in the USA!

The rules are fairly similar…(and some are not, but these are the similar rules).

– No dribbling.
– Hold the ball for three seconds only.
– Arms length away to defend.
– No stealing the ball once a player has possession.
– Passes may only be stolen/intercepted in the air.
– If an offensive player is shooting – defense may hold arms straight up.
– Establish the pivot foot.
– Allow one bounce when attempting to catch the ball.
– Ball goes to other team when dribble occurs.
– By emphasizing the “no dribble rule” you are emphasizing to the kids to look for a pass immediately after catching a ball.
– No close defense on the person with the ball. You must be away by at least arm’s length.
– Travelling fouls and minor contact fouls, like swatting at the ball of a passer or shooter will be a change of possession penalty.

So, it appears that the netball rules are slowly seeping into basketball, and I like the way they call it ‘Ultimate Basketball’ like it’s even better than regular basketball (well, of course, in my opinion it is, cos it’s a rough and tough game that is full of strategy and tactics and skill and speed). And it ain’t just for girls, remember…..

Your netball time has come America.

Lament of an Expat

So, I bought this book about being an expat in the USA called ‘LAMENT OF AN EXPAT: How I Discovered America And Tried to Mend’ by Leonora Burton. 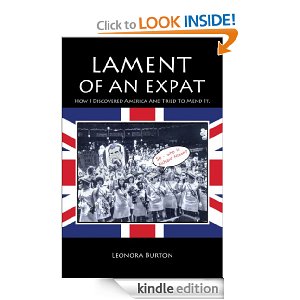 Got it on my KindleFire

It’s got great reviews: ‘This is the witty, sometimes bemused, chronicle of an expat’s plunge into American culture, with its love of the gun and the sacred dollar, with its rigid constitution and singular laws and with the kindness, generosity and humanity of ordinary Americans. She describes encounters with the Mafia, a plane crash, Robert Redford, a Madam and a call girl from her home town in Wales, a famous author so drunk he couldn’t talk, a cardboard funeral casket, Richard Nixon and a Caribbean wedding that was supposed to exclude God but didn’t. One of her twin boys lives in New York City, she writes, while the other is in London, maintaining her connection with the U.K. Along the way, she makes a foe of Roger Ailes, top earner for Rupert Murdoch’s media empire, and loves every minute of the dispute which continues with this book.’

But, ‘mend America’…..? I’m not sure about that bit, unless of course it’s all very tongue in cheek…..But it seems the British always want to mend stuff about America – that’s not to say that there aren’t things that aren’t a bit wonky, but I think that ‘mend’ sometimes really means ‘change it to the way the British do it’……

I’ll let you know how the book is 🙂

An America friend wrote yesterday that it was a special date day being the 12th November 2013. That’s written 11/12/13 in the USA. I wrote back that, sadly, this was not a special numerical day for us Brits, but she kindly pointed out that on 11th December 2013 it would be since we would write 11/12/13. Hoorah!

I still get confuddled by the date thing tho – I often write my birthday the British way round, which looks like I was born in March instead of December. Actually, maybe I could start having two birthdays…..! 😉