Posted on November 11, 2013 by ukdesperatehousewifeusa

These days are the same but different in the USA and the UK….

Today is Veterans’ Day in the USA. Across the nation, Americans are commemorating the service and sacrifice of military service members this Veterans’ Day.

What kind of thing is happening across the USA? Well, the U.S. military’s first female four-star general is a grand marshal at New York City’s Veterans Day Parade – Gen. Ann E. Dunwoody retired last year after a 37-year Army career. Good for her.

And at the World Trade Center families in the parade carried a giant American flag along Fifth Avenue with some shouting, “Don’t forget 9/11”. Organizers of Monday’s parade up Fifth Avenue have renamed it America’s Parade. They say it’s the largest Veterans Day event in the nation.

Last year on Veterans’ Day I put my blog address of 20 mini-sized footballs, which were being sent out to troops in Afghanistan by my bank. I don’t know if they got to them and if they read my blog, but just in case – ‘Hello to you’, if you are one of those said folk. 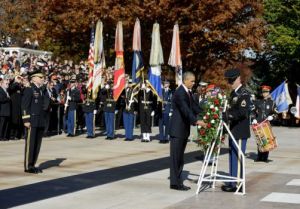 Yesterday the UK fell silent in tribute to service personnel who have died during conflicts, as part of the annual Remembrance Sunday service.

A two-minute silence was observed, as always (even if you’re in Tesco at the fruit and veg aisle checking out the ripeness of kiwis, you fall silent to remember). And the Queen laid the first wreath at the Cenotaph in central London. This is a very traditional UK day.

The queen with her poppies

More than 10,000 military veterans and civilian representatives marched past the monument and services also took place at memorials across the UK, in Commonwealth countries and at bases abroad.

Today in the UK is known as Armistice Day and we wear poppies as a sign of respect and remembrance.

Prince Harry lays a wreath on behalf of his father

You know, I like that we have the same days to remember our military and service personnel, but generally it seems the military in the USA is thought of more often and perhaps more highly than back in the UK, and it’s not just on Veterans’ Day.

For instance, when we were at Sea World in Florida before Shamu did her great leaping thing all military personnel from the USA and other countries were invited to stand and were honoured and applauded. I just don’t think you’d get that in the UK. It’s not the first time I’ve seen that happen – people clapping and praising the military and I also observe a whole host of bumper stickers saying ‘Proud parent of marine’ etc. Not sure I’ve ever seen one of those on a car in the UK.

When I mentioned this to someone they said that the regard of the military changed after 9/11 in the USA.

Respect to them all, everywhere. 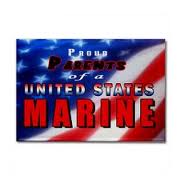 A proud parent sticker in the USA

Why did I stumble?

Well, the thing is lovely serving people of America, I’m British and I can’t help that when I order tea in the morning and you ask me if I want it ‘iced’ or ‘hot’ I stumble and try not to look incredulous that you have asked me this question, it’s just that, um, of course I would like hot tea…. I’m British (and it’s freezing outside and it’s early in the morning).

Anyway, I guess it is just a British thing!

(Now for another British thing, and one that somewhat helps and confuses my argument….

Anyway, when I was in Florida for Christmas last year and at the pool at 3pm in the afternoon in 90 degree heat, I asked the barman if he had any hot tea. He looked at me incredulously and replied: ‘No we do not have anything hot. No one ever wants a hot drink in this kind of heat.’ But I do! It’s 3pm in the afternoon, and I would like a nice cup of tea…. I’m British! 😉 )

See, it is possible!