Posted on October 29, 2013 by ukdesperatehousewifeusa

Okay, so here’s the deal. American does do Halloween superbly. Fact.

It’s like one massive party, and everyone wants to dress up as anything they can think of (seriously, anything goes) and have a good time.

See, you can dress as anything!

Why do we Brits poo-poo Halloween so much? What is it that [most] Americans love so much about Halloween?

This is what one commentator on the Americans’ love of Halloween has to say: ‘Halloween evolved into the holiday it is today for a number of reasons. Americans have a long history of believe in the supernatural and have created many different stories and superstitions. These supernatural ideas were further expanded upon by American Hollywood. Hollywood brought many of these stories to life and they become part of the massive pop culture. Halloween no longer has any direct connection to religion in America and is celebrated by almost everyone. It is simply a celebration of fantasy.’

I wanted to equate it to some kind of British Easter parade that we did in the 70s and 80s, but that fell well short of the kind of enthusiasm and imagination and general party atmosphere that Halloween musters up in the USA. 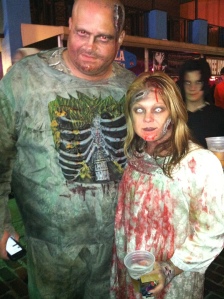 So, we were in Myrtle Beach for the Halloween Costume Party ‘Fright Fest’ and oh my, did it deliver. I’ve never seen anything like it as we were faced with costumes from The Waking Dead to The Muppets (my favourite was Beaker) and from Despicable Me to Carrie. So much effort was put in to those costumes!

And rightly so – the prizes up for grabs were First Prize $2k, Second Prize $1000, and Third Prize $500 so there was much riding on this.

What an atmosphere! I was fist pumping and whooping along with the crowd in no time – such excitement to see all the costumes and find out who the winner was! Oh my gawd, the atmosphere was electric!

Here’s some of the best costumes we saw. 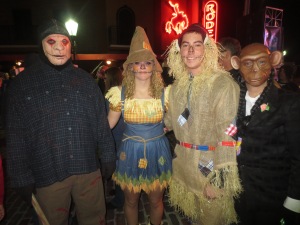 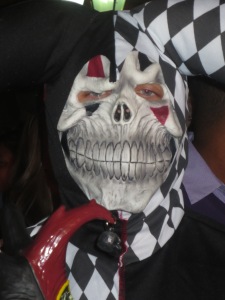 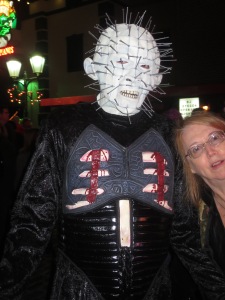 The entire family – kids and all (Chucky was there too)

She should have won! 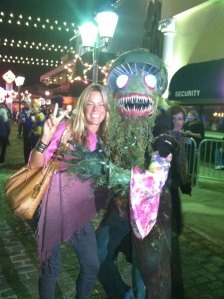 Yes, he is trying to grab my boob 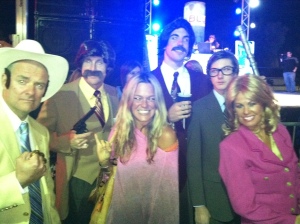 This is the radio host Scoty from http://rock107mb.com, who were hosting the event. He is dressed as ‘Prancercise’ inventor Joanna Rohrback (love her) – http://www.youtube.com/watch?v=o-50GjySwew

And there we have it – Halloween genius. It’s all about the party and having fun, and I like that a lot. Hoorah for Halloween!

As we were queuing at the airport a sign stood out to me. This one.

Just in case I had one of these on me….. (which obviously I did not!)

And finally, the myth about people wearing their PJs at Walmart is TRUE.

Here is the pictorial evidence from my friend, Judy, to prove it.

PJs and slippers at Walmart

Let it be known that this also happens at Tesco in the UK, however. Sigh.

But hang on a cotton-pickin’ minute, those are Ralph Lauren PJ pants/bottoms (yes, we call them pyjama bottoms in the UK)! Not any old PJ bottoms are hanging around Walmart…. 😉