Posted on October 28, 2013 by ukdesperatehousewifeusa

Tea and us Brits 🙂

Before we begin the next installment about South Carolina, here is something I need to share with you.

It’s about being British and the phenomenon that is tea. I am currently having a cuppa (okay, its green, but whatever, it’s tea!) as I blog, of course.

This delightful video explains it all….

Anyhow, back to the South!

Wow, this place is kind of eerie and beautiful and charming and spooky and fabulous and historical and lovely all rolled into one MASSIVE plantation near Charleston.

Founded in 1676 by the Drayton family, Magnolia Plantation has survived the centuries and witnessed the history of the American nation unfold before it from the American Revolution through the Civil War and beyond. It is the oldest public tourist site in the ‘Lowcountry’, and the oldest public gardens in America, opening its doors to visitors in 1870 to view the thousands of beautiful flowers and plants in its famous gardens.

It is truly magical and wonderous and thought-provoking. 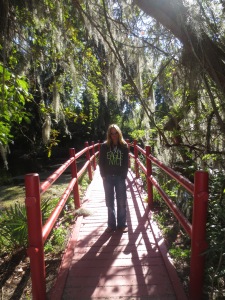 History about the plantation 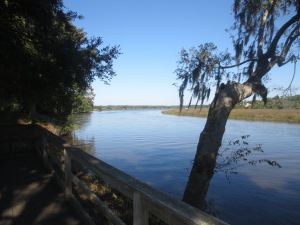 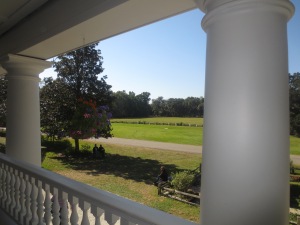 View from the piazza of the main house 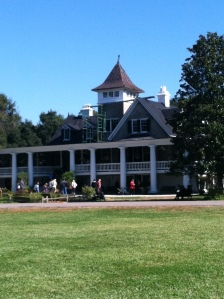 And then there were the slave quarters, which are shocking and fascinating in their own right. The plantation has a project underway called ‘From Slavery to Freedom: The Magnolia Cabin Project’, which began more than four years ago in an effort to preserve five historic structures that date back to 1850. These former slave dwellings now serve as the focal point for a presentation about African-American history.

What I liked about the Magnolia Plantation is that it recognizes the importance of acknowledging the vital role that Gullah people and culture plays in any interpretation of ‘Lowcountry’ history. They state on the website: ‘By addressing this often overlooked part of the region’s narrative, Magnolia seeks to respectfully afford credit where credit is due.’ Nice.

Walking around here, and seeing the cabins and the presentation, you are given an insight into the tumultuous times continuously challenging African-American families from slavery, the Jim Crow/segregation era and through the modern Civil Rights period. 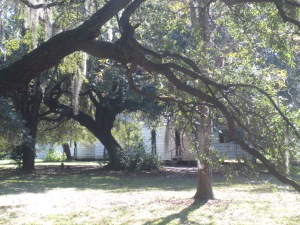 Cabins in the woods

Cabin A – Circa 1850’s Slave Cabin
Built sometime in the early 1850’s, this pine-framed duplex was designed to hold two separate families with as many as six people per room. Enslaved African-Americans lived here until Charleston fell to Union forces in February 1865.

Cabin B – 1926 Gardener’s Home
Built in the 1850’s, this cabin was restored to reflect the mid 1920’s era when it was the home of one of Magnolia’s gardeners. The Hastie family often brought newspapers with them from Charleston and New York, which were used for cabin insulation and are recreated here.

Cabin C – 1969 Leach Family Home
Also erected in the 1850’s, this cabin was later inhabited by free African-Americans working at Magnolia. The Leach family boasted a long lineage of prestigious gardeners dating back to the early 1930’s, and Johnnie Leach resided here from 1946 until 1969.

Cabin D – 1870 Freedmen’s House
African-American workers resided in this cabin off and on into the 1980’s, making extensive alterations over the years. Magnolia Plantation restored this 1850’s structure to its 1870’s condition to illustrate a time when many former slaves became gardeners, porters and guides to the many visitors who traveled to Charleston aboard steamboats once tourism began its rise after the Civil War.

Cabin E – Circa 1900 Gardener’s Home
This is the only cabin on this street not built during slavery. All indicators point to the building’s completion occurring around 1900, and would have provided shelter for an individual or couple without children. The last person to inhabit this cabin was groundskeeper Allen Haynes, who left in 1999.

I don’t think I’ve ever seen a real swap before. Especially not one that promises alligators. Gutted, though. Did not see an alligator.

But the swamp itself was mesmerising. It was like a green Yellow Brick Road winding its way through the trees. It was so vivid and bright, it almost felt like a movie set.

If you can have favourite swamps, then this is mine 😉 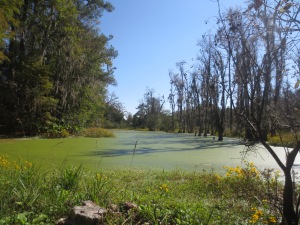 If you’ve been reading this blog a while, you might know that I like American signage. I just do.

So, here’s some of that very signage that I spotted during our roadtrip that tickled my fancy 🙂

Are you still considered a teen if you are 20 then? 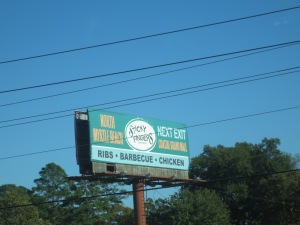 So, I PROMISE that Halloween in Myrtle Beach and PJs in Walmart etc will be in the next blog! There’s just so much to share with you, my Bloglings 🙂